New York State is passing new gun regulations. They are the first to do so after the 2012 Newtown (Connecticut) school shooting. The legislation will be lauded for its expanded ban on assault weapons and a broader definition of those weapons. The part of the legislation that will probably get the least attention the mention of mental illness. We seem to agree (subconsciously at least) that massacring innocent people is not the work of a sane individual. We also collectively agree that there are many many people struggling with their thoughts and feelings every single day. Most of us would agree that if we have a mental health system in this country to speak of, it is filled with holes and dead ends. So any legislation that even begins to address the mentally ill is a good thing, no?

Not when the legislation is a directive to mental health practitioners to report patients who are going to harm themselves and others, allowing the authorities to then remove guns from that patient’s home. Talk about your paper tigers! If people struggling with mental illness had access to a practitioner we’d have reason to celebrate! If mental health practitioners could predict who will cause harm we would be living in a very safe world indeed. A person is determined to be a danger to him/herself or others when the patient says that he or she is a danger to him/herself or others. So this ‘dangerous’ group is now a minute percentage of the actual group of potentially dangerous people. Now compound that with the fact that this new legislation might deter someone with any hint of paranoia or delusion from seeking mental health support. Add to that mess the fact that the shooting that prompted this legislation was done with weapons belonging to the murderer’s mother, not the man himself. You see how this might be more smoke than substance?

This could and should be the opportunity to decree that people haunted by their thoughts and impulses should not have to work so hard to get care. This is our chance to say that mental illnesses are complex and challenging to treat, but so is cancer and like cancer we need to go at it with everything we’ve got. Right now before the voices or the rage or the hopelessness cause a person to lash out on a subway platform, or slash someone on the street or shoot a toddler with a handgun or burn down a home; is when we should say that decent people do not allow this to continue. Decent people know that when we choose to not fight for those that need us most we forever must bear some responsibility for the consequences. Decency doesn’t allow for empty gestures or placating. There is no doubt that any restriction on guns is good for our country, and this legislation makes an impact on that goal. The public may very well applaud the creators of this legislation. There may be pats on the back and a nice sense of achievement. But at the end of the day the authors of this legislation know that they missed a golden opportunity to make real, humane and lasting change and may have stalled whatever building momentum there was to do so.

Posted by Anonymous on January 15, 2013 in Cultural Critique, Well-Being

Coming To The Rescue 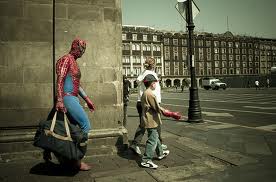 Second guessing the behavior of others without benefit of any insight or personal experience is a national (and perhaps international) pastime. There is even a sport metaphor for such behavior, something to do with an armchair and quarterbacks. Part of our fascination with celebrity is the sheer enjoyment we derive from critiquing their decisions (which we learn from finely tuned propaganda.) We quickly come to conclusions about what we would do in the same situation. We make these declarations with limited data and zero experience. After all, no one has ever been in anyone else’s situation. Not really. We all bring our own baggage and outlook into each experience. Yet why let that fact get in the way of good water cooler chat!

The other day a man was killed in the subway. This happens from time to time. It is always horrific and always sends a temporary chill down the spine of commuters. This latest tragedy doesn’t appear to be completely random which is perversely comforting. The victim is no less dead and his friends and family no less shattered because it was not random. Witnesses report that the suspect was talking loudly to himself. There is video footage of the victim in close proximity to and facing the suspect as the suspect screamed directives. The footage could be deceiving and could mean other things, but it certainly looks as if the two had engaged in some back and forth. They had connected in some manner and it ended very tragically.

Attention is now being paid to the fact that there were many people on that subway platform who did not engage. After the victim was pushed onto the track he tried to get back up to the platform. No one helped. This was not entirely a flashback to the murder of Kitty Genovese (when 38 people admitted to hearing her cries for help and chose to not come to her aid) as at least one person did more than stand by. A professional photographer used his camera’s flash to alert the oncoming train (49 times.) He is now being criticized for capturing the image of the victim rather than pulling the man to safety. (The conductor did see the flash and did slow down.) The photographer, with his own life experience and orientation, did what he thought best. It is not clear how close he was to the victim. It’s easier to question his behavior because we have tangible proof of what he did. But what of everyone else on that platform who did nothing but scream? Could everyone had been far enough away from the victim that they assumed someone else would come to the rescue? Perhaps, subway platforms are long. Was the assailant still very close to the victim and people feared for their own safety? That could be the case. We may never know exactly why the victim was not saved.

What we can be certain of is that violent behavior is scary. We are biologically wired to be frightened by frightening things. But we’ve been socialized to rise above that fear to help those in need. If we choose to second-guess those individuals on the subway platform let’s also internalize that criticism. Let’s use the horrific event to remind ourselves that keeping our head down and ignoring the plight of others is only a short-term survival strategy. Sure we might get through life completely unscathed but what kind of life would it have been and what kind of world would we have?

Posted by Anonymous on December 5, 2012 in Cultural Critique, Well-Being 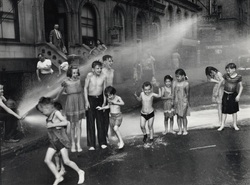 Back of my neck getting burnt and gritty

When I was 6, we moved to Brooklyn on the 1st of July.  We were welcomed by the sound of illegal fireworks.  Day and night.  For a week.  That was my introduction to the very uniqueness of summers in the city.  My little suburban self knew nothing of italian ices, ice cream men, fruit men, and perhaps the most magical of all; the carnival ride man.  Actual rides (hopefully) bolted onto trucks would arrive on our block.  Real rides!  It was a step beyond awesome.
On the more sweltering of days, a grown-up would open the hydrants for us.  The braver and older of us, would charge right into the spray.  The smaller and lighter-weight of us, played in the puddles.

We moved out of the city the following winter, but I still think of these city summer hallmarks.  They mingle with the images of people sleeping on fire escapes and sunbathing on tar roof, and the mass of humanity at Coney Island.

Yesterday I experienced a brand new (to me) summer in the city phenomenon.  It was about 87 degrees (not sweltering, but a breeze would have been nice.)  I made my way into the subway (at a location I had never frequented) and saw grown men (18-35 years) using the subway platform as a clubhouse.  Some had brought folding chairs.  Now what is still so puzzling about choosing to hang out on a subway platform, is that we were all of 2 blocks from Riverside Park.  What kind of bet do you think they lost?  Do they do this every day?  Perhaps only on weekends?  Did I mention that there wasn’t a cloud in the sky?  I’m so very puzzled.