Nancy Drew and the Secret of SingleGuyFromSyosset 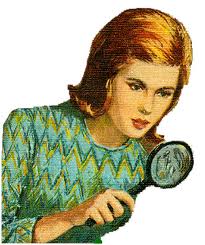 Have you heard? Victoria Clark got married. You know, Victoria Clark? The actress who won a Tony for Light In The Piazza? She played a middle-aged woman, on her first trip to Italy, away from her critical and controlling husband, who discovers what real love is courtesy of a beautiful older Italian man with a uniquely understanding wife. She comes alive and sees the world with new eyes. In real life Ms. Clark discovered true love…(cue screeching-break sound) on eHarmony. That’s right, according to the New York Times, Ms. Victoria Clark, the beautiful, charming, immensely talented and outrageously accomplished Victoria Clark went on-line to find a date. Ya know what? If it’s good enough for her, it’s good enough for me.

Do I believe that with a few strategic clicks you can find the person who makes you say; “I had no idea this even existed?” Can you amazon.com your way to turning the world Technicolor and finally understanding what all those songs and movies are really about? Sorry, no, I don’t believe that. My motivation is much more Cabaret based (“what good is sitting alone in your room”) and most definitely not about finding love, which I believe is elusive and magical and not the result of clicking on the right profile. Quite frankly a significant part of the appeal of internet dating, or perhaps any dating, is the Nancy Drew opportunities it presents. I graduated from a research university. That, partnered with my master criminal mind makes me more skilled than the average bear at unearthing the most horrific things about people.

Unlike meeting people in real life, you can Google as an online person reveals factoids about himself. (It’s doable but terribly recherché when meeting someone in real life, and involves several suspicious trips to the Ladies’ Room.) Recently I received very thoughtful and presumably forthcoming communications. He shared life experiences and viewpoints while perhaps fictitious were far more thought-out than the usual “you look hot, what’s your workout regime?” In the process of setting up an in person date he sent me his phone number. I was going to text when I realized I had enough clues to do some research without data gathered from additional communiqué. Two clicks later I discovered multiple sites in which this gentleman had ranted and raged using the most vulgar, racist and anti-homosexual language. That’s “multiple sites” with a photo of him as an avatar. He wasn’t even trying to hide his crazy. To his credit? My first instinct was to run out and buy a deadbolt for my door. It wasn’t the vulgarity mind you; I can curse the ink off a sailor, but his complete lack of judgment and anger management. This is the same man who when asked straight out about temper replied that life was too short to ever lose one’s temper. Yikes! So he’s either a liar or a sociopath or some special blend of a little of both. Deadbolt. Of course being a woman I actually briefly thought; “how will I let him down easily?” Yeah, I got over that notion pretty damn quickly. As fast as a hatchet coming through my front door! I managed to shake/drink that one off and head for the next profile (it’s best to not think of them as “men” or “dates” at this point of the process. It could be a well-trained homicidal monkey doing the typing.)

Typically people using internet dating sites know that when creating a profile you should put your best foot forward. This strategy includes using the most flattering photo you can find. The “more of me to love” fellows tend to use headshots only. For the follicley challenged there are a lot of baseball cap and helmet photos. It’s best to look beyond the professionally wrapped package and peek under the paper. Sometimes there are splendid clues to be found in the written portion. You gotta give props to a guy who on the first page of his profile spells out his psychic affliction; “my father left when I was 9 which devastated my mother. I learned that I couldn’t count on anyone but myself and should keep everyone at arms’ length” Call Me! How about the gentleman when asked to list 3 things he simply couldn’t live without, spells out a graphic event that can only be PG-13 described as “when a mommy and daddy love each other very much…” Really? I bet that reels the ladies in, huh fella? A list of “hates” which described me to a T captured my imagination. Discovering the following list: “TV Addict”, “Vain”, “Judgmental” made me momentarily wonder if he could actually see me through the computer. I mean that could be the lead of my obituary! I was so very tempted to rope him into a date just to announce mid-dinner, “Surprise! It’s me; your worst nightmare!!”

Dating is fun, particularly for a girl detective.