RSS
← Get Ready For The Summer
Betty Ford →

The Motherf**ker With The Hat – Review 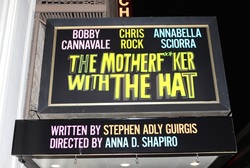 A hefty discount and an imminent closing, motivated me to see The Motherf**er With The Hat yesterday.  I was not alone.  Every seat was filled and hopefuls filled the box office and trolled the line looking to score a ticket.  “Score” being an interesting choice of words in a play about substance abuse.

The Hat (please allow me this abbreviation) has received fabulous press and is billed as a 90 minute comedy.  The cast, as illustrated at left, is marquee worthy.  Directed by Anna D. Shapiro (August Osage County) and featuring Bobby Cannavale (Mauritius) I wasn’t filled with All My Sons (featuring Mrs. Cruise) apprehension.  The applause which greeted each famous person as they came on stage indicated what drove the audience to this production.  The (almost) manic laughter that greeted each line lent a very sitcom- set feel to the occasion.  The play is not funny.  Amusing at times, and there is one laugh-out-loud line towards the end, but overall?  Not funny.  And that’s okay.  I wasn’t there for stand-up.  The play is very straightforward.  There are no surprises, despite the gasp of the woman next to me when a paramour was revealed.  Theatre etiquette prevented me from asking her; “Really?  There are only five people in the cast.  Who did you think she was sleeping with?”

What is interesting about the play itself, is its accurate depiction of human beings, particularly their relationships with alcohol and drugs.  On paper, these characters are well developed and realistic.  Stephen Adly Guirgis has written intelligently about mental frailty.  Having endured (the first 30 minutes) of Next To Normal, I do not take this accomplishment lightly.  It is far too easy to create cartoonish characters and saddle them with enough business and cheap dialogue to indicate “troubled person here.”  Guirgis does none of that.  Instead he has written an intelligent depiction of real people.  Unfortunately however, it isn’t a very interesting play.  There is not much of a story.  It’s not boring, it’s just that there is no dramatic tension.  I have not decided how much the direction and performances exacerbated this shortcoming.

Most of the dialogue was yelled for 90 minutes.  I can not fathom how these actors do eight performances a week!  The stage is miked, but the actors are not.  This is mostly an issue for Annabella Sciorra, a lovely delicate actress saddled with a made for film voice.  Her thin head voice simply can not work in a theatre.  It is a shame for she really is a fine actress.  I’m not sure why every other performer, save Yul Vazquez was yelling.  Was Ms. Shapiro using the device in lieu of dramatic tension?  I’m not sure.  I just know I found it to be distracting.  A bit sitcom-y even.

Speaking of sitcoms, I wonder if Ms. Shapiro has ever witnessed someone using cocaine.  Their demeanor, perhaps even speech pattern, changes a wee bit after using.  I found it odd that when the users slip (and of course, they slip) there was no discernible difference in their demeanor.  Addicts change when they use, that’s why they’re addicts.  I don’t think the script was written; “characters shall show no changes.”  I think it was a directorial decision.

Chris Rock delivers his dialogue well.  He is best when seated as he does not know what to do with his body when standing.  He is serviceable when reciting his lines.  He did not connect with anyone, but wonderfully, neither does his character.

Elizabeth Rodriguez plays the pivotal role of Veronica.  We are to see Bobby Cannavale’s character (Jackie) through his relationship with her.  There is no chemistry between these two people and this caused a ripple effect in plausibility.  I could not understand Jackie’s unraveling, as I could not see his lifeline to Veronica.  Perhaps if she had stopped screaming for a moment?  I don’t know.  I suspect she was just miscast, and not just because lifetime cocaine users do not have that kind of muscle definition.

The absolute gorgeous stand-out of this production is Yul Vazquez.  His character and his portrayal are fully formed.  Interesting that he is the only non-addict in the group.  He was funny and lovely and had the best mini-monologue of the entire play.  I cared deeply for him.  I am frustrated by the notion that more Mr. Vazquezes and fewer headliners might have made this a great show.

I would like to read this play and tease out on my own what the producers saw.  I suspect something merely got lost in the translation.

← Get Ready For The Summer
Betty Ford →