RSS
← The Motherf**ker With The Hat – Review
Master Class – Review → 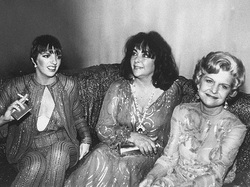 Betty Ford has died.  I will never be confused for a political analyst, and my childhood memories are as suspect as anyone’s.  However, I am struck with the idea that Mrs. Ford was an American pioneer.  Long before the Huffington Post, the country knew Mrs. Ford’s opinions on serious social issues.  Decades (and generations) before any First Lady would be criticized for being politically vocal, Mrs. Ford made her position known on such subjects as legalized abortion, the ERA and premarital sex (remember, this was the 1970s, premarital sex was still up for discussion as a social ill.)

Before we had the luxury of watching newsreaders have their colon examined on national television, Betty Ford went public with her bout of breast cancer.  Before there were little pink ribbons, Mrs. Ford inspired tens of thousands of women to be screened and seek treatment.

Forty years before people would make a career from their public struggles with addiction, Mrs. Ford went public with her struggles.  She helped to create the treatment center which is now such a part of the American vernacular it is used as a verb.

I know little, if anything of her husband’s politics (save for the pardon) but I am willing to venture that Mrs. Ford’s “firsts” outweigh her husband’s.  For better or worse, she really was our nation’s first; Public Figures, They’re Just Like Us!Bet

← The Motherf**ker With The Hat – Review
Master Class – Review →

One response to “Betty Ford”