The Joys of Summer (Fashion) 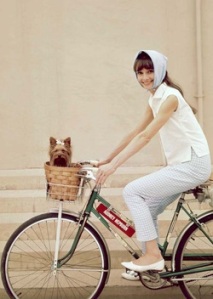 I am a four-season girl.  I cannot imagine living anywhere where time cannot be marked by nature.  I do not, however, love all seasons equally.  I’ve never been much for summer.  This is not entirely due to the heat nor the humidity, but rather how those elements play havoc with the desire to accessorize.  It’s only after I embraced the joy of the enormous floppy hat, earrings, and heeled sandals, that I started to enjoy donning a swimsuit.  For years, it was not embarrassment which kept me from socializing in the equivalent of water resistant underwear, it was how incredibly boring the outfit was!  Where is the creativity or joy in pulling on two pieces of clothing?  A bathing suit cover-up doesn’t really count as the third piece as all it really conveys is that one has something they’d prefer to cover up.

So here it is, mid-August, and I have done my due diligence with a drawer filled with colorful shorts and flirty cotton skirts.  I have collected a bevy of attractive and highly functional sandals, and several straw hats.  I have handbags and even a few pieces of jewelry which scream Summer.  And I have found my peace.  Now this state should be its own reward…

But it is challenging to be putting concerted, and not necessarily intuitive, energy into an endeavor that clearly is solo.  Have you seen what is walking the streets of this city?  (“Street walking” is an apt imagery.)  It is not clumsy attempts of seasonally appropriate ensembles that have sullied my soul.  I accept that appearance is not a priority for all.  It is instead the promotion of private parts to public parts that leaves me horrified/dejected.  For months, I have seen every size and shape of breast, spilling out of “not meant as outerwear” apparel.  The summer top or dress is ostensibly a set of pasties.  I am not referring to décolletage or snug fitting cotton blouses.  I am referencing the custom of 50-75% of the area in question to be al fresco.  Why?  Do they really suffer such heat exhaustion, they can’t be covered?  Is it simply the epitome of lazy, to use ones own parts as an accessory?

In the interest of fair and balanced, I must point out that the population’s nether regions have had their fair days in the sun as well.  Oh, the things I’ve seen.  And on public transport!  No doubt these women are the same who sanitize a public toilet seat within an inch of its life.  The hygiene contradiction is boggling.  For those who do not live alone or whose mothers are still living, they choose instead to wear see-through clothing.  Most of the transparent garments I have seen are not haute couture, but instead very cheap off the rack clothing that is meant to be worn with underpinnings.  Some choose to disregard this intention entirely (oh my eyes!)  Others see this as in invitation to wear the boldest most incongruous mass-market under things.  This might be a good place to mention that if one is old enough to pull up one’s own pants, one needn’t have underpants festooned with imagery.

I will trudge through the next month, donning sundresses, wearing silver jewelry and white pants, and pedicuring like mad.  But I will do so while longingly eyeing my sweaters, boots and scarves, and reminding myself that biology will win out: private parts do shy from the cold.