Words Can’t Bring You Down* 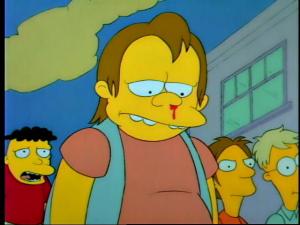 “What are your thoughts on bullying?” I was asked the other day.  There’s no simple answer is there?  While not a fan of bullying, I also don’t think it’s the black plague.  We need to be careful not to label all behavior that is less than kind as bullying.  Labeling behavior as bullying does not encourage conversation and understanding but leads to “zero tolerance” policies that can have illogical and arbitrary consequences.

I don’t know if incidents of bullying have increased.  How can we know when we’re not entirely clear what bullying is?  Here’s what bullying is not; having a disagreement, calling another person a name, or excluding someone from an activity.  Bullying certainly is causing a person harm, waging an ongoing campaign of physical intimidation, and inciting ostracization or teasing.  As soon as children are old enough to engage socially (around 3 years old) they begin to create groups.  Even in kindergarten children begin to identify whom to tease.  Their target can appear to be a mirror image of the group.  They are not necessarily weaker than others.  They may be singled out for the brand of sandwich bag they bring to school.  This is how it can start.

There have always been (and undoubtedly always will be) children who behave dreadfully to other children.  There are children who are not emotionally well, and are capable of simply inconceivable acts.  But then there are children, who are, well they are children.  They show poor judgment and above all, live for the acceptance of their peers.  They find themselves caught up in a behavior that fills them with shame and even more shamefully, a little pride.

What concerns me is how children are handling being the target of less than kind behavior.  I worry that children are reacting in intense and fatal ways.  A child committing violence (to themselves or others) because they felt bullied, is not normal.  Even for an adolescent.  I worry that all children are not as strong as they once were.  (For really what is a bully but one who feels inadequate?)  I worry that we have cultivated a generation (or more) whose lives are more external than internal, leaving them feeling fragile and teetering when the world no longer applauds.

When we hold graduation ceremonies for preschoolers, kindergartners, or hell, anything below high school, we are sending an esteem-crushing message to our children: “Doing the bare minimum may be your greatest accomplishment, yeah for you!”  We are also teaching them that their worth is intrinsically tied to applause.  Every activity now has an audience.  When they play, their parents are on the sidelines or actually coaching them along.  Every recital is videotaped and shown.  In short, their lives are excruciatingly public from their first framed sonogram.

There is no internal strength that is derived from an external life (just look at the personal life of any celebrity past or present.)  Self-esteem is not cultivated through “Best Snack Provider” trophies or “Honor Student” bumper stickers.  Self-esteem is created by the self.  It is grown through mastery.  When a child navigates new terrain, on his/her own, he/she glows with the accomplishment.  When a child problem solves or conquers a fear, they grow stronger.  Praise (real or empty) does not create self-esteem, independence does.  Praising a preschooler for “good waving!” is the gateway to a lifetime of empty praises.  Children are not stupid.  They know the difference.  We build strong children by encouraging increasing amounts of independence.

A child who feels a true sense of worth, who feels they are good at something, is much less likely to pick on someone else.  He/she is also much less likely to be devastated by being picked on.  We need to take (physical and/or psychological) violence against children very seriously.  We need to equally take seriously how our children are responding to such acts.  We are a culture that loves to treat symptoms and ignore causes.  How do I feel about bullying? I feel that the stronger (adults) need to acknowledge and redress their cultivation of the weaker.

Posted by Anonymous on June 1, 2012 in Childhood