The Atlantic Theatre has had a recent facelift.  And like a lot of us small unassuming people when having 8.5 million dollars at one’s disposal, they have rendered themselves unrecognizable.  There is a lobby now, and a box office, and that odd musty smell is gone, and that’s nice.  But the house now looks like every other house.  Gone are the oddly pitched bleacher seats, the modest stage and what made the space so unique; the public restroom in the wings.  The stage is now massive, there’s a fly (or perhaps two) and the seats are brand new and set somewhat below the apron.  It looks shiny and new, but it’s lacking in character.

Aptly, the new space is being christened with Storefront Church.  Written and directed by John Patrick Shanley’s, Storefront Church is the final installment in his “church and state” trilogy.  (The first two were Doubt and Defiance.)  Storefront Church would not be recognizable as part of this trilogy, except we are told that it is.  Doubt, about the Catholic Church, and Defiance about the military (both directed by Doug Hughes) were tightly told tales of imposing institutions.  It’s difficult to put the same dramatic significance upon banking.

The story is about faith and the mortgage business.  (That’s “AND” not “IN”) and is as creaky as it sounds.  Issuing a second mortgage to a poor risk doesn’t seem to have the same resonance as that of child molestation or the moralistic labyrinth of the military.  If we are to extrapolate the insidious racism at work in the refinance industry, why is the recipient of the second mortgage married to a white Jewish man?  That may be just too “riddle wrapped in an enigma” for me. The first act is at times a demonstration of the new technical toys at the theatre’s disposable.  The stage crew seemed to be on stage as much as the cast.  (Doubt and Defiance were simply staged powerful pieces.)  There are so many scene changes in the first act that whatever power was there, was part of what got swept up by the crew (I’m not kidding, they come out and sweep the stage while we watch.)  There are (massive) set changes twice, to stage soulful staring on a bench.  A song plays for each of these stareathons.  “Snow” falls for one of them, which may provide a nice wink for The Hunchback of Notre Dame riff, but is distracting as it keeps accidentally falling throughout the play.  (That’s not a technical problem, fake snow always does that.)  The Hunchback reference is interesting but is a bit belabored.  When the play opens on a bug-eyed droopy-lipped Reed Van Druyten (the stunning Zach Grenier) and Ethan Goldklang (the powerful Bob Dishy) is holding the book and talking about it; we get it.  There is one reference in Act II that should stay because it’s funny, but the others?  Well that’s why you shouldn’t necessarily direct your own new work.

Another director might not bring out the beauty that Mr Shanley does in his actors, but he might have also had a little heart-to-heart with the playwright.  The theme of the play is far too vague to burden it with superfluous scenes and lumbering set changes.  This becomes even clearer during Act II.  There are only two scenes and they are perfectly written.  They are clear, powerful, engaging and terribly moving.

The cast includes Tonya Pinkins who (much to the audience’s delight) sings a spiritual.  That voice!  Her role is not large, but she is absolutely delightful.  Giancarlo Esposito (Donaldo) and Ron Cephas Jones (Chester) are incredibly convincing as the Bronx Borough President and Pastor.  Their (lengthy) scene in the first act is clunky and far too esoteric, but they do a splendid job with it.  The wonderfully smarmy Jordan Lage (Tom) rounds out the cast.  You know Tom, you’ve worked with Tom, you want to hurt Tom.

Storefront Church is in previews and will be open June 11 – June 24.  If Act I can more resemble Act II this will be a stunning play.  As it is now, it should be seen for the performances.  It is rare to see a collection of seasoned actors like this in such an intimate space.

Posted by Anonymous on May 21, 2012 in Uncategorized 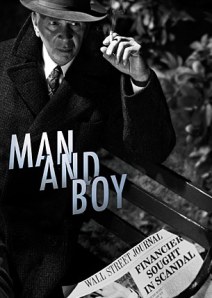 The Rondabout Theatre Company has mounted a revival of Terence Rattigan’s Man and Boy.  For those with a pressing engagement or abbreviated attention span, I will cut to the chase: it is phenomenal.

Frank Langella (‘nough said?) stars in this drama set in Greenwich Village in 1934.  Directed by Maria Aiken, the fluid and balanced action unfolds in real time one October evening.  Man and Boy, written in 1961, feels terribly modern both in its storyline and style.  Langella’s character, Gregor Antonescu is an international financier, credited with resuscitating the European markets after World War I.  He is debonair, larger than life, steely, and by his own admission, without conscious.  Things have come to a bit of a nasty head for G.A., as he is known to his trusty assistant Sven Johnson (Michael Siberry) who bears a second cousin resemblance to Max in Sunset Boulevard.  Sven seeks out the Greenwich Village apartment of G.A.’s estranged son Basil (Adam Driver) for a clandestine business meeting.  Basil has denounced his lineage and lives as a piano playing socialist in a dreary basement apartment (designed by Derek McLane.)  Underneath the thin layer of his disguise is Basil’s adulation of dear old dad.

Not surprisingly G.A.’s impulse upon seeing his son for the first time in five years, is to offer the young man to his closeted business adversary.  Prostituting one’s young, does not earn any parenting awards, but it feels completely in character for G.A.  There is nothing surprising about the turn in the story, yet it must be said that the matinee audience (of a certain age and with just a hint of bridge and tunnel A.O.C.) giggled nervously with the implications.  This storyline is not meant to be funny, and in 1934 Greenwich Village socialist circles, homosexual activity would not be unknown.  I suspect a different audience would have a different response.

The cast is perfectly balanced out by Basil’s girlfriend Carol (Virginia Kull,) the business nemesis Mark (Zach Grenier) his accountant Beeston (Brian Hutchinson) and  G.A.’s second wife the (purchased title of) Countess (Francesca Faridany.)  The relationships and interactions between these characters is completely thought out and believable.  Most of us won’t commandeer a basement apartment in an attempt to rescue our international financial empire, but we can relate and understand the words and actions of all of these characters.  That is the mark of truth in writing.

This production has an overall British feel to it, no accident considering the lineage of some of the creative team.  There is a simple intelligence to the production that this play richly deserves.  There are plays that take (well rewarded) effort on the part of the audience.  I love Martin McDonagh, but you better not blink for 2 hours or you will be lost.  Additionally, plays steeped in symbolism can be a delicious intellectual exercise.  But there is something to say for clean, emotionally true drama.  And when it’s exquisitely executed, it is a must see.

Posted by Anonymous on October 16, 2011 in Uncategorized