You’ve Got To Pick A Pocket Or Two* 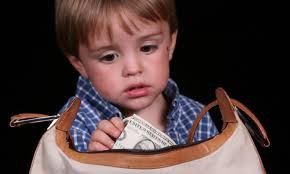 One of the classic adolescent rebellions played out in homes around the world involves the interpretation of limits. Taking the car out at 12:01 AM is not technically driving at night. Having friends over to ‘study’ isn’t really having a party. The teen, having recently acquired the ability to discern shades of grey, knows exactly what they’re doing. They know that the intention of the ‘night driving’ restriction has to do with the dark and not the time. They know that they are not to have friends over when there is no adult present. But one can admire their commitment to the job of testing limits and tormenting parents. That is the point of adolescence (that and moving themselves and their packed bags closer to the front door). But what about full-grown people who engage in the same rule/law/ethics interpretations? How did they get stuck in an adolescent developmental stage and does it apply to all areas of their lives?

Does the president of the Academy of Arts & Sciences have her staff falsely claim her to have a doctorate on grant proposals, then dare them to pierce something? After stashing close to half a million dollars in an off-shore account does the U.S. Trade Nominee then swipe a twenty out of his mom’s wallet? As the Military Joint Chiefs of Staff defend their male dominated, hierarchical, and abstruse approach to sex crimes are they texting each other about getting with Senator Gillibrand? There are times when skirting the letter of the law and finding creative solutions is admirable. Many examples come to mind within institutions catering to the vulnerable. Hospitals are notorious for rules & regulations that may not always be beneficial to a patient. Social services agencies can at times be more rules than reason. Schools become increasingly rule-bound with every semester. We are often put in the position of reinterpreting or bypassing rules (or even laws) when the situation warrants it.

And this is when things get sticky. A mature adult with a sense of communal responsibility and an interest in the world should be able to discern between personal benefit and compassion/public good. Letting your dog off the leash in a populated park may make the dog happy, but mostly it makes you feel like a cool dog owner. Smashing the window of a parked car to rescue a dog from a sun-baked death is for the benefit of the dog. Both of these acts are against the law and only one poses a potential danger to others (the leash-less dog). We are continuously enacting laws or fines to encourage people to act decently. The very fact that we need to approach decency from the outside in is problematic. Parents everywhere will tell you how exasperating this is as they engage in it day after day after day. Time-outs begat no phone, begat no car begat grounding. Parenthood can at times seems like a progression of creative external incentives to do the right thing.

Isn’t the idea of adulthood that we’ve now internalized decency? Don’t we pull up our big boy/girl pants and realize all we have is our word and reputation? When we decide to lie (and lying is always a decision) about our credentials (on resumes, Linkedin, proposals, and in interviews) do we honestly think that no one will find out? Are we making a conscious decision to be seen as not just less qualified but a liar too? When we put money offshore, presumably having decided that we’ve already paid what we care to in taxes, do we not worry how that will be perceived? In essence the law that allows for this form of tax evasion is no different than many other less sexy loopholes. We all know that some level of corruption exists in enabling these rules and laws to exist. When we avail ourselves of a corrupt, personally beneficial act, we do so knowing we are harming others. That we teach our children (by our act) that this is a decent way to live is baffling. But that we can consider ourselves suitable for public office is simply loony. That we can look at military brass behaving abhorrently and hear the strains of ‘boys will be boys’ in our heads tells us everything.

Children will be children, it’s their job after all. And teens will be teens. But will adults be adults? What becomes of a society that is mired in adolescence? Impulse driven self-absorbed, risk tolerant behavior is very scary when it lacks parental oversight. Rules and laws have their place but they can’t take the place of conscience. Nothing can.

Posted by Anonymous on June 5, 2013 in Childhood, Cultural Critique