N.Y. City Center Encores! is back to its old self with its production of Rodgers & Hammerstein’s Pipe Dream (1955.)  Fully choreographed (Kelli Barclay,) with a perfect set (John Lee Beatty) and costumes (Toni-Leslie James) that by all rights should be in my closet, Encores! once again, does not disappoint.

Pipe Dream is based on two John Steinback novels (Cannery Row and Sweet Thursday) and has a certain grittiness that one may not always associate with Rodgers & Hammerstein.  To be perfectly candid, I often suffer from insulin depletion at declarations of climbing every mountain, or of the corn being as high as an elephant’s eye.  I’ve always been more of a; boy like that, sit down you’re rocking the boat, you’ll never get away from me, kinda gal.  And while Pipe Dreams is by no means a perfect show, it has lured me onto Team R&H.

The theme of the show is that of the world of work, and not the button downed briefcase carrying kind.  Much of the show takes place in both a house of…well, a house of female comfort and a flop house.  There are some simply beautiful songs; Everybody’s Got A Home But Me and Suzy Is A Good Thing (which opening notes are reminiscent of the opening to Bali Hai.)  There are also one or two songs that simply fall flat.  However, with a strong producer (back in 1955) it’s clear that this show could have been work-shopped into something wonderful.

With any show that does not come complete with recognizable tunes or story, or has not come directly from a film or comic book; casting is key.  Marc Bruni (director) hit a trifecta with Leslie Uggams, Tom Wopat and Stephen Wallem.  Mr. Wopat and Ms. Uggams are in great voice and simply devour their characters.  Mr. Wallem is an extremely enjoyable character actor (with a very good singing voice) and captures the character of Hazel perfectly.  The male and female romantic leads; Will Chase and Laura Osnes are not as suited to their roles.  Romantic leads are never that interesting to play, and without a certain spark, or electric magnetism, they are not very interesting to watch.

The real star of any Encores! production is the thirty(!) piece orchestra, directed by Rob Berman.  At a time when paired down orchestras are being divided and sequestered into basement rooms with tiny monitors of the stage (across the street) it is phenomenal to see a full orchestra on the stage.  When the curtain rose to reveal the elevated orchestra I heard a young girl gasp.  If there is anything that is less than positive about Encores! is that the run is always far too brief.  Pipe Dreams plays until April 1st.

Posted by Anonymous on March 28, 2012 in Uncategorized

What A Swell Party It Was 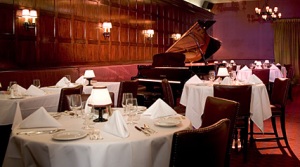 Do you ever play the lottery game?  You know, the one in which you fantasize about what you’d do with the winnings?  At every turn of this game, over countless years, my fantasies always take the exact same form.  It involves the requisite good works (anything else would be indecent) and the party.  The setting for the party has suffered some blows over the years.  It had to be relocated from the QE II to the Rainbow Room to now destinations unknown.  The event details are always the same; a small group friends, fabulous food, champagne and first-rate musical performances selected for dancing and swooning pleasure.

The real point of the lottery game is that it allows one to consider what makes one’s heart sing.  The party I dream of will most likely not become a reality, but I can approach my most meaningful friendships in the same celebratory manner.  I can also dream of an intimate musical performance that feels as if it is being performed just for me.  And on one cold winter night that dream came true.

A few years ago I was at the Oak Room at the Algonquin Hotel to see Tom Wopat.  He is a remarkable performer; chock full of charisma and a love of ballads.  That winter night there were no more than 30 people in the audience and I was seated directly in front of Mr. Wopat.  As he sang his West Side Story medley inches from my table, my eyes filled and my mind raced; I was living part of my lottery dream.

My thoughts turn to that magical night with the news that the Algonquin Hotel will be shuttering the Oak Room for good.  When they docked the QE II I found it unsettling.  But when they closed the Rainbow Room and now the Oak Room, it was personal.  I know I don’t live in the most genteel of times, but when I step into these gorgeous time capsules I can dream.  And really, without a little sepia toned fantasy, doesn’t it all tend to get just a bit too dreary?

Posted by Anonymous on February 3, 2012 in Style