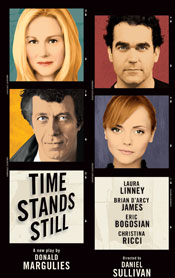 At the very heart of Time Stands Still is the tension between two primary human relationships; that which we have with the world and that which we have with our primary partner.  The thought, and emotion provoking play by Donald Marguiles (Brooklyn Boy, Dinner with Friends) is directed by Daniel Sullivan (Proof, The Homecoming) and playing at the lovely Cort Theatre.  This four character Manhattan Theatre Club production moved to Broadway with only one change in cast, Christina Ricci for Alicia Silverstone.

The play, set entirely in a decidedly not posh Williamsburg Brooklyn loft, is the story of two couples.  It is a tight, lovely, moving and solid play that can only be called a(cringe inducing) “grown-up” play.  Perhaps I am attaching this moniker after seeing several productions focused on the angst of twenty somethings?  More likely it is due to the very adult subject matter.  How does one reconcile one’s place in the world with one’s sense of self?  The primary couple, James (Brian d’Arcy James) and Sarah (Laura Linney) have just returned from Iraq, she with intense physical scars, and he with equally intense psychological scars.  James is a freelance journalist and Sarah and acclaimed photographer employed by an acclaimed magazine.  The other couple in the mix is Sarah’s editor (and former torch carrying paramour) Richard (Eric Bogosian) and his new very young girlfriend Mandy (Christina Ricci.)  The central story is how James and Sarah will now move forward.  The layers of these four characters are fascinating and are teased out with fine directing nuance.  If I had any complaint it was that Brian d’Arcy James seemed to be a bit restrained in his performance.  I was left wondering if Mr. Sullivan intentionally designed the production in this manner so as to allow for Ms. Linney more of a spotlight, or if in fact he was being very faithful to the script.  All four characters go through palpable metamorphoses.  It is a testament to the actors that I wanted to pummel their characters with questions to tease out  more about their motivations.  How much of Sarah’s life choices are predicated on her trust fund?  Would she be so quick to do the work she does if she wasn’t supported by someone for which she has utter disdain?  And what of James’ spiral into his new world of fear (which is demonstrated just a bit heavy handedly by the former war reporter now wearing a bicycle helmet.)  Is James’ fear now as much as a fulcrum as Sarah’s money is for her?  Richard and Mandy deserve a spin-off play of their own, so too are their lives mesmerizing.  We watch their relationship evolve into a solid celebration of positivity while the mature relationship (they’ve been together 8 1/2 years) of Sarah and James can not survive in the lightness.  To my delight, Marguiles presents the dark side as an affect of immaturity.  There is a lovely moment when Mandy explains how utterly childish it is to wrap oneself in angst and despair.

The performances of all four of these actors are simply magnificent.  Ms Ricci plays younger quite convincingly and has a graceful and solid stage presence.  Mr. Bogosian seems at home both on the stage and in the Brooklyn loft.  Mr. James and Ms. Linney are beautiful together and apart.  This is an incredibly thought provoking play, that also includes some laughs (on of them quite cheap, but I’m in a forgiving mood.)  I am not sure if it will speak to every age group, but if you can see 30 ahead or can remember 55, this play will resonate deeply.  The final scene is quietly powerful and quite beautiful, causing a large lump in my throat.