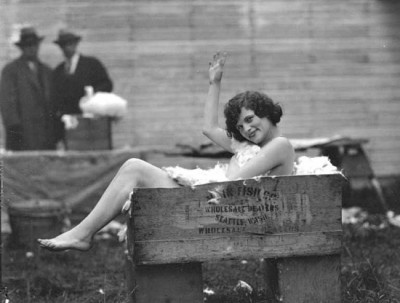 Human beings do stupid things; in fact we’re kinda known for it. We are impulsive, petty and opportunistic. (We are also all kinds of wonderful things but those aren’t what get us in trouble.) We make bad choices particularly in our youth. It’s why parents and sealed criminal records were invented. We tend to get better at staying out of trouble and accruing regrets as we age. But if we are doing any kind of living, mistakes will be made.

Recently there’s been some chatter about jerry-rigging the repercussions of our bad choices. This post-behavior regulating centers on the internet. You know, the internet, that thing that apparently not only has changed how we communicate and access information but has changed the very core of human behavior. Not. Nothing about human behavior has changed. The fact that bad decisions can now live forever and be accessed by all has changed. But people have not just discovered; lying, bullying or taking nude photos. Having a naked image of oneself has always been tricky (there’s a reason that prostitutes were often hired by painters.) Since the invention of photography a woman’s (it’s almost always a woman) life could be upended in later years by the discovery of racy photos. Many an aspiring actress has had to survive having early “modeling” photos published upon her newfound fame. The internet didn’t invent disseminating naked pictures. Nor did it create the motive to do so.

The internet did also not invent bullying, or the incentive to do so. It is tempting to say otherwise as reports of bullying have grown as internet usage has. Causation and correlation are very different. Sales of ice cream increase at the same time that sex crimes increase. Eating ice cream does not cause an increase in sex crimes, but both behaviors do happen in warmer weather. The internet has grown in popularity as our lives have become much more external. Our children’s first photos now happen in utero (or pee stick.) Those photos are shared with the world. Our children now “graduate” kindergarten and those photos are shared with the world. They are taught from the very beginning that life occurs with an audience in place. Every action, or inaction is captured in still or moving image. Life is a performance and therefore far more external than it once was. It is challenging to develop a strong sense of self (and hence esteem) when so little is done independently or internally. It can happen, but it is difficult. A shaky sense of self is a breeding ground for bullying. Strong, confident people do not bully. Children with parents who are in control, strong, authoritative and present, know there’ll be repercussions for their nasty behavior. The reported rise in children committing suicide as a result of bullying is sobering. Children with a strong sense of self will be miserable when bullied. But children with an internal life will turn off the computer (as instructed by a parent) and refuse to look at the nastiness. A child with a sense of self will find other outlets and activities outside of the bullying sphere. Do adults have to pay closer attention? Absolutely, but it’s not the internet that’s causing this behavior.

It’s not the internet that causes people to make false claims about products or services. Fake reviews have existed since there’s been something to review. (“The Epic of Gilgamesh is a must read!!!!!”) Even legitimate reviews are manipulated to sell. Open any old-fashioned print newspaper and you’ll see adverts with blurbs unrecognizable to the reviewer. It’s always been a buyer beware world. Unless a review is authored by a trusted source, it’s safe to assume it’s not all that reliable. Do we really need laws to try and regulate fake reviews on the internet? If it was even possible to regulate false claims (and it’s not) why focus on the internet? There are people promising me instant weight loss, better skin, teeth and hair every minute on television. My newspaper is filled with press releases posing as articles, blatantly selling products, people or places. When did being discerning become something we can regulate?

The internet and social media have changed the speed and range of our communication. Globally we have access to information and entertainment previously unimagined. It’s a little bit archive, a splash of Town Square, a news ticker and an entertainment center. Many people simply have no frame of reference for something so expansive and it is tempting to anthropomorphize technology. It’s a fool’s errand to regulate human behavior on the internet. Technology is ever changing and people will find ways around any awkward measure to regulate. Teaching our children (and reminding ourselves) that nude photos can be embarrassing, bullying is a pitiful behavior of the weak, and liars usually get caught would serve us better.

Posted by Anonymous on September 24, 2013 in Cultural Critique, Media/Marketing

Mega Pixel Memories Of The Way We Were 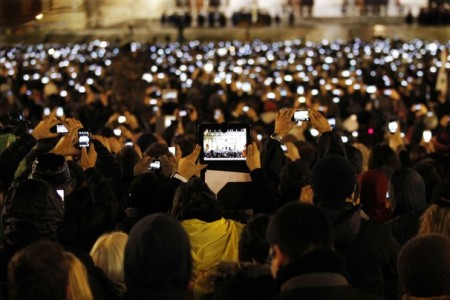 Do you remember home movies? The old silent ones; with the children acting goofy for the camera and the mother shooing away the cameraman/husband. Even if you never saw one of these in real life you’ve seen them in film or television. One of the more lovely and touching is in the film Adam’s Rib; with Katherine Hepburn and Spencer Tracy frolicking around their farm. Knowing just a bit about the actors we feel as if we’re watching an actual home movie. Where have they gone these capsules of family life? One need only attend a child’s recital or traipse through Time Square to know that parents are recording every single moment. But then what? Does the family actually gather around the home screen and watch the footage? The same family who reportedly does not have time for family dinners? Somewhat doubtful, no? Are the moving images sent to family in distant places? Do the videos simply find a resting place on social media? And what of all the moving images taken of stationary objects? What happens to all that statue footage? Has the very act of capturing an event become the end point?

A cluster of people holding up their cellphones is now the universal sign of; “Everybody look what’s going down.” What’s going down could be celebrity in nature and a captured photo or moving image proves you were in proximity. Nowhere is this more evident than in large-scale events. Stadiums are filled with flashing (!) phones. It doesn’t matter that the photo will be so fuzzy as to always need a description attached. It is how we now record (in every way) an experience. It is somewhat reminiscent of tokens once collected; autographs, ticket stubs, crushed cocktail napkins and matchbooks. Scrapbooks, or for the less sentimental or organized, dresser drawers, were once filled with these reminders. One could look at a browned curled remnant of a corsage and conjure a magical evening. The rusty tetanus wielding protest pin reminds us of that chaotic, exhilarating march. A photo or video can evoke those memories as well. But sooner or later what we tend to remember is the photo or the video. Our own mental imagery fades as the recorded image stakes its claim.

And what of the recording? Is it possible to actually have any experience beyond that of cinematographer? Do we actually experience our child’s soccer game, dance performance, birthday party? Or are we simply recording it in the hope of ‘making memories’ for them? What does it mean to ‘make a memory’ and why would we pursue it? Memories are organic. A healthy brain remembers what is meaningful to the individual and (mercifully) often blocks what is too much to bear. The impulse to ‘create memories’ can be a bit creepy. A future memory is not only an oxymoron it’s an abstraction. Being consumed by an abstraction versus being present in the moment is not desirable. How people (including children) are experiencing something in the here and now is far more pressing than anything out in the ether. Being a recorder means disengagement. A court reporter is not participating in the proceedings or even processing any of the analysis. They are recording what others are experiencing (at lightening speed.) A photo or two doesn’t prevent engaging fully in an experience. But chances are a party of eight, photographing each and every course and individual serving doesn’t have the makings of a night to remember.

Posted by Anonymous on May 15, 2013 in Cultural Critique