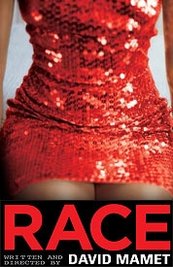 I (finally) saw David Mamet’s Race this weekend at the fabulous Ethel Barrymore Theatre.  Much has been written about Mamet’s latest plays being “less than Mamet.”  I am not a huge proponent of holding artists to a rigid historical framework, yet went to this production with just a bit of apprehension.  If the critics (professional and water cooler alike) find Mamet’s more recent works to be less explosive and edgy, I would agree.  If they are equating the fading of sizzle and the increase of substance to be an indication of talent slippage, I would disagree.  Race is powerful in the way that Mamet is always powerful.  The use of language is intoxicating, the rhythms hypnotic, and the respect for the audience palpable.  We are made to question the questions posed.  There is subtext that is presented, not pretentiously, but dramatically.  There are elements in the storyline similar to Doubt, and clearly the audience left the theatre in a similar; “did he, didn’t he?” manner.  The cast (in classic Mamet style) is comprised of four characters.  Also, classically Mamet, is the poor female character.  Whether the cartoonishly drawn female has become his intentional hallmark or not, it is there, as predictable as a Hirschfeld “Nina.”

The plot centers around a wealthy white man (Richard Thomas) accused of raping a black woman.  The attorneys considering representing Mr. Thomas are played exquisitely by James Spader and David Alan Grier.  Their assistant is a young woman of color (Kerry Washington.)  Directed by Mr. Mamet, on an old fashioned slanted stage, creating great sight lines and interesting subtext.  Mr. Thomas displays utterly convincing mannerism of the manor born.  There was a moment, when Spader, Grier, and Thomas were on stage together, that I briefly thought of the different decades of pop-culture they represented (In Living Color, Brat Pack, Waltons) but that is entirely my own issue, and not that of the actors or the production!

Ms. Washington is not served by her part or direction.  She is stilted and not believable as a person, let alone a neophyte or con-artist (we’re never sure which.)  Elizabeth Moss was recently able to break out of the Mamet female stranglehold in Speed the Plow.  I would suggest, that Ms Moss is the exception.  The only other distraction in the production is a strange pause between scenes in the second act.  It is not needed dramatically or technically and is just kind of bizarre.

If you love language, if you have any interest in race, politics or sociology, or if you simply love seeing brilliant performances, this is the play for you.  It was entirely refreshing to leave a play feeling intellectually challenged and respected.  The cast could be perceived as interlopers (although all are stage actors) and this could be seen by some as a ‘bold face’ name production.  It did not feel star studded in the least (even William H Macy and his wife, seated in front of me did not disturb the lack of glamorousness of the production.)  Perhaps when all is said and done, I’ll take multi-layered substance over sizzle any day.