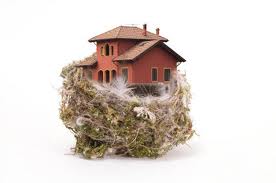 Empty nests aren’t what they used to be. In fact you might be hard pressed to find a nest with vacancies. This isn’t exactly news; we’ve been hearing about dismal job markets and diminished economic opportunities for young adults for quite some time now. It’s commonplace to hear of households that include adult children (and even their children.) What is rarely mentioned in these discussions is that it is often quite an agreeable arrangement. Modern parents and children (of all ages except perhaps peak adolescence) enjoy spending time together.

The generations share interests, activities and even clothing. They are often in constant communication and know a great deal about each other’s lives. In generations past this was rarely the case in traditional American families. A child had his/her circle of friends and interests and upon reaching adolescence rebelled against all that his/her parents represented. The politics, music and literature of the younger generation were unrecognizable to that of the older. The clothing, hairstyles and lingo were equally foreign and perhaps infuriating. Who would want to spend time with someone they couldn’t understand? An adolescent’s primary goal was to get out of the house and away from the hopelessly old-fashioned parents. College served that purpose well, as did first apartments (filled with like-aged and minded roommates.)

Something has happened in recent decades to blur the lines between the generations. The most intriguing aspect to the change is that it’s both the younger and older moving towards each other. If we were to jump in a jeep with our binoculars and pursue the average American nuclear family in their natural habitat, we would spot this morphing phenomenon. Parents and children (of all ages) look an awful lot alike. They dress alike, they groom alike, they text alike. The fact that this happens in public proves that everyone is okay with it. Daughters don’t mind (or perhaps even enjoy) their mothers appropriating their dark/cadaver like nail colors, sons enjoy/tolerate sharing their baseball caps with their fathers. From the back (if weight wasn’t a factor) you’d be hard pressed to determine which generation was which. It’s been a long time since we’ve witnessed a unified family look, in nature that is; it happens in Christmas cards all the time. Surely there’s a more recent example of this indistinguishable appearance; but it is Little House On The Prairie that comes to my mind.

If we were to hop out of the jeep and (lawfully) enter homes, we might discover that there is no “adult” space (formally known as the living room) and “child” space but instead “family” space. Unless a parent engages in a delicate or dangerous activity, there is probably no “off-limits” space within the home (for fun, check to see if there’s a lock on the parents’ bedroom.) The music, movies, social media, gadgets, and fitness regimes are most likely shared. This average family probably socializes together and often vacations together. They will attend all school and family events as a unit as well. To the novice jeep rider this may appear novel. But it is actually a very old phenomenon (see Little House reference.) Back when we were forging new territory and had little if any connections to the world, our nuclear family was our world. One’s fortunes and survival depended on the strength of the nuclear family.

It is slightly ironic that in an age of such instant and ubiquitous connectivity we revert back to an isolationist mode of living. But if we take a closer look (back in the jeep everyone) we will see that we are anything but connected to the larger world. When is the last time you had friends over for dinner? How often are you invited over for drinks? When was your last block party, potluck or open house? How many times a week, or even month, do you go out with friends (without children in tow?) How long have you been at your current job? Do you lunch or happy hour with your co-workers? How often do you attend religious or community events? Can you recall the last time you dropped by a friend’s home unannounced?

Some of our disconnection to the larger world is our own doing and choice, but some of it is not. A job isn’t life sentences any longer, nor is marriage. We move (by choice or not) and we start over. We lose contact and perhaps the confidence to make new contacts. We are so electronically plugged in that isolation can feel like a reprieve. Our work life is so heavily in favor of extroversion that off-hours cocooning is a sanity saver. The reasons we choose to enmesh with our nuclear family could be many. The affects are probably always the same; nests are less empty. What is indisputable is that if we stay in the jeep long enough (and refuel a few hundred times) we will see this phenomenon shift once again. In 25 years or so we will start hearing the ancient strains of; “What are you wearing?!” “Turn that noise down!” “That’s not a word!!!”

Posted by Anonymous on August 23, 2013 in Childhood, Cultural Critique

Letter To A Graduate

Dear College Graduate – Congratulations on your brand spanking new diploma! No matter where you go or what you do you will always have this accomplishment. You can never become a lapsed graduate or have your degree expire. There are few things like that in life so by all means bask a bit. No doubt you’ve heard a few rumblings about the job market and your prospects of doing better than your parents. Some speaker at your graduation (or older relative at your party) thought himself or herself insightful and wise to depress you with their opinion. You may have taken loans that have a looming repayment date. The thought of which may waken you in the middle of the night, the young adult version of a monster under the bed. This would be a good time to remember that with any luck, life is long and you’re going to be just fine. But there are some harsh realities that must be faced.

Uncle Don is right; the job market is different for you than it was for him. When he (and Aunt Joyce) graduated college, sometime during the heyday of network television and the invention of the answering machine (look it up) there was such a thing as “entry-level” jobs. A person could join a firm (that’s what companies were called then) at the bottom and work their way up. These jobs were plentiful as back then people did the work of machines. A mailroom in a large firm had to be staffed as emails and texts were sent in paper form and had to be sorted and delivered by people. Receptionists and switchboard operators did the work of automated phone trees. And secretaries did just about everything. In the finance world clerks and administrative assistants (which meant entry-level administrator before it became a euphemism for secretary) were an integral part of the pre-technology workplace. Back then Don and Joyce would have sent letters to dozens of firms and answered ads to get an interview with personnel (aka H.R.) During that appointment they would most likely be given aptitude tests and then placed within the organization according to their strengths. Once placed Don and Joyce would learn the ropes, distinguish themselves, serve their time and move on up or even out.

While technology is a wonderful thing, as is progress in general, and the new(ish) field has created jobs, it has also diminished an entire classification of jobs. Of course this phenomenon isn’t entirely new. Don and Joyce may remember their ancestors starting out as “office boys” or runners. There was a time when department stores (which ruled the retail world) were staffed with; counter help, salespeople, cashiers, wrappers (items went home wrapped in brown paper and string not in bags), elevator operators, restroom attendants, doormen, models, dressers, dressing room assistants…You get the idea. Department stores themselves are practically a relic from the past, let alone the diversity of employment opportunities. So yes, with each generation there seems to be a dramatic change in the employment tableau. But you and your classmates are also facing much more competition for the sparse opportunities. Many many more people go to and graduate from college today. Many more people borrow substantial amounts of money to do so. Don and Joyce knew little about that. Their friends went to schools they could afford. They might have worked their way through school, went on scholarship or went to state schools that were highly subsidized.

So great news, right?! Don was right to rain on your parade! Well not exactly. Challenging isn’t the same as hopeless. Tenacity is your best friend right now, that and humility and hard work. Be willing to do anything (that’s legal) and work like a dog. Put your head down and get it done. Knock on every door; don’t wait for anyone to do anything for you. You need to be your own manager and press agent. Style yourself and your profile to be attractive to an employer. Prove why you’re an asset, not why you deserve a job. Let go of any notion of a dream job, and embrace the concept of a job. Believe in destiny and really hard work and let go of fantasy. And once you get that job, and you will, treat it and others with respect. Go get ’em.

Posted by Anonymous on June 26, 2013 in Childhood, Education