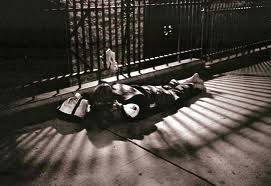 The local 24-hour news coverage has ceased and regularly scheduled programming has resumed. Field reporters are back to their irregular but predictable sleep schedules. The discerning viewer will notice that reporter and reader’s roots have been touched up and in some cases; skin re-bronzed. Television is letting us know that the immediacy has ended. Soon the ads imploring people to give to a nationally recognized relief organization will ebb. The crisis of Hurricane Sandy will quickly become one that is long-term and far more complicated to remedy.

Soon people will have the first tier of their needs met (clothing, food, water, and some form of shelter.) In a few months, shuttered hospitals and schools will reopen, and the last of the storm damage refuse will be removed. Temporary housing will have to be erected or reconfigured out of empty space. Health issues, both mental and physical will arise and hopefully be addressed. Soon the long-term problems will be more than any well-organized and well-meaning band of traveling volunteers could possibly remedy.

After the sodden drywall and molded carpeting is hauled away what is there for a volunteer to do? Once people can cook and store food once again, the hot meal preparations and delivery will end. When the mud and sand have gone away, the cleaning supply donations will cease and the tired and dirty shovel wielding helpers will go home. And that is good.

But what of the people that did not have access to food (hot or cold) or shelter before the hurricane? One of the more (morally) troubling stories to be reported after the storm was that of the evacuation of Bellevue. The evacuation was long and arduous and two patients were left behind (intentionally; they weren’t able to make it down the stairs.) Many of the residents of the Men’s Shelter (located in the section of Bellevue previously used as a psychiatric facility) were now living in a high school with other storm evacuees. (You may have heard of this particular temporary shelter, as the sanitary conditions were horrific.) When it came time to reopen the school the sheltered were escorted out. It is not entirely clear where the former residents of the Bellevue Men’s Shelter went. Nor do we know where the couple, previously living in the evacuated Penn Station, went. But the issues raised are clear and difficult to ignore.

During the crisis period, it’s doubtful that anyone was turned away from food, water and clothing distribution. But as we move into the next phase, when housing must be found for as many as 30,000; not everyone will be welcome. It’s doubtful that those without benefit of housing prior to the storm will be offered housing after the storm. People who were in need of food, water, clothing and shelter prior to the storm will still be in need after the volunteers go home. If anything their access to scarce resources will be diminished, as no doubt those who were previously teetering on the edge of homelessness were pushed full force by the surge of the storm.

There are no easy solutions. We’ve witnessed the enormity of people’s generosity during what is packaged as a crisis. Living as if we are in perpetual crisis is neither sustainable nor desirable. But broadening our definition of crisis would help us channel the very best of humanity to help those most in need. Yes, it is simpler and far more manageable to restore people to their stasis after an external wallop. Perhaps if we shifted our focus from cause to solution, we would find it all less daunting. Why someone is residing in Penn Station is somewhat beside the point. If we agree that all people should have access to safe housing, food, mental and physical health care then back story is beside the point. No one is more or less worthy of stability and care. We know that and during our best moments we feel it.

We have seen an impressive (and functional) collaboration of; state, federal, local, private, public, religious and corporate efforts during the aftermath of Hurricane Sandy. We now know it can be done. We are left wondering why it isn’t done everyday.

Posted by Anonymous on November 15, 2012 in Cultural Critique

If there is anything positive to come out of a disaster it is people’s desire to help. Whether you can give money, goods or time it can be challenging to find the best match for your resources.

The Red Cross does a good job of public relations and is the go-to organizations for many monetary donations. There are many ways to make a direct and noticeable impact with your money:

People are voicing frustration in their desire to volunteer. Keep in mind that relief efforts are geared towards organizing aid to victims not organizing volunteer opportunities. The best approach is to look for a need and fill it.

The impulse to help is a great one. In the days immediately after an emergency often we only need show up to have our efforts put to good use. As time goes by it takes a bit more effort to offer the most effective assistance. But the knowledge that our help is actually helping is a suitable reward.

Posted by Anonymous on November 6, 2012 in Cultural Critique, Well-Being

New York City is incredibly diverse. If you’ve only seen the city on television or in (modern) film you might not have a full appreciation of its variations. You’d have every reason to believe that it’s a playground of opulence for its many residents. You may think that a woman who earn 5 cents a word buys $600 shoes, and everyone leaves their lovely high rise place of work in a black car. If you visit New York, either through a tunnel every weekend, or with the family every Christmas, you might think this is a city of bright lights and cobble stoned streets. Small parts of it are. But most of it is simply neighborhoods. New York City is comprised of five boroughs, Manhattan being the smallest of them all. On the island of Manhattan there is a different neighborhood every 10 blocks or so. Public housing high rises stand across the street from modern multi-million dollar condominiums. Check cashing stores are three blocks from $15 million Central Park view penthouses.

Ordinarily there is a simmering discomfort with this stark economic diversity. It (naturally) starts to boil when resources become even more scarce. Unemployment and economic strain exacerbates the tension and a disaster shines a bright spotlight on the strain. It seems clear a week after Hurricane Sandy that many people in public housing are now homeless. (Current estimates are that between 20-40,000 people are homeless and they are predominantly residents of public housing.) There are people left in the dark who rely on government aid under normal circumstances. EBT cards (aka food stamps) don’t work without power. School lunches don’t get served when there’s no school. Much of the worst destruction in New York City was in waterfront communities. With few exceptions these communities are working class. Several of them, Staten Island being in the lead, are home to NYC police officers and firefighters. These are not vacation homes and communities that were lost.

As schools begin to reopen this week we will see more of this disparity of neighborhoods. Children are being shuttled to schools that can reopen. New bus drivers are learning new routes. Some schools will open while also serving as shelters (and it’s too daunting to consider all the ways that can go wrong.) Special needs children may not have access to their services. Many children will have experienced trauma and might have a long road of instability in front of them.

There is some chaos that is universal. This week many of us may wait in line for gasoline or to vote. If we pay close attention to what frightening concepts scarcity, chaos and vulnerability are we might just have a tiny sense of what is being experienced by hundreds of thousands of people.

Posted by Anonymous on November 5, 2012 in Cultural Critique

Running Before You Can Walk

Most likely it will be some time before the full effect of Hurricane Sandy is known. It’s been over 48 hours since the hurricane hit and what we do know is that it was as bad as predicted. What could not be predicted was the unprecedented damage to infrastructure. Residents of Zone A (which includes all five boroughs) have not been allowed to return to their homes. Power is still off below 34th street in Manhattan and across all boroughs. NYC schools will be closed all week. The subways will start running (in a limited fashion) this morning while some stations are still being pumped out. There are sections of New York City (and certainly New Jersey) that are simply gone. Hospitals are still being evacuated. Human lives have been lost.

Yet the decision has been made to hold a marathon across these five boroughs in 72 hours. The NYC marathon is a huge event and brings money, tourists and international attention to the city. It draws resources, particularly those of first responders and congests traffic and walkways. No doubt many of the runners had flown in (to train on American soil) before the hurricane hit. The airports are slowly opening again, so perhaps the remaining can still get here. Those hotels not filled with evacuees, hospital, city and media staff are probably open. But for the love of decency is this really the time to have such a spectacle?

The runners start their journey on Staten Island which might just be the hardest hit area of the city. The ferry is still not running and the south ferry subway station is probably still under water. Even if they all can get there, should they? People have lost everything and are living (in the cold) without power or telephones. How will they feel seeing police and firefighters shepherding elite (and amateur) runners past their devastated homes? Will there be thousands of spectators offering cups of water to runners throughout the boroughs? Where will the water come from? Will it be trucked in and labeled “for runners only?”

High Occupancy Vehicle rules are in effect for the bridges and tunnels into Manhattan. Drivers (perhaps without access to electricity and/or information) will be turned away if there are not 3 people in the car. This restriction is necessary as without full subway service it is next to impossible to move through the streets of Manhattan. (The reason the President of the United States did not just bop on over from his visit with New Jersey is that he would have had to been airlifted into Manhattan. There are no spare traffic lanes for emergency vehicles let alone a motorcade.) But by all means, bring in more people and close streets for the runners.

The runners finish in Central Park, no doubt that section was given first priority in the clean-up efforts. Scaffolding and bleachers need to be built for the marathon. Parks employees and firefighters are needed to create that structure. It has been suggested (by non-city dwellers) that the marathon is a “sign of recovery” or a “welcome diversion.” Perhaps from a bird’s eye view this is the case. But down here in the decimated nest it feels terribly insensitive and disrespectful.

Posted by Anonymous on November 1, 2012 in Cultural Critique