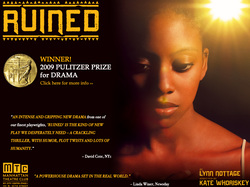 This weekend I went, somewhat begrudgingly, to see Ruined at The Manhattan Theatre Club.  I knew nothing about the play except that it had just won the Pulitzer Prize for Lynn Nottage.  That was enough to get me in the door.  Once in the theatre (at City Center) I saw the gigantic wall poster of the play’s synopsis.  Out of the corner of my eye I spotted those key cringe inducing Eve Ensler nouns and shuddered.  I felt lightheaded at the very thought of two and a half hours of “women as victims” narrative.  Well, in for a penny in for a pound as they say.  I had my ticket and a pocketful of gourmet jelly beans, so into the theatre with me.  My equilibrium began to return the moment I stepped inside.  The stage is enormous and the house is small; and excellent combination.  The stage was set dramatically and expansively, every inch was performance space.  I took my comfortable sixth row seat and spun my head like an owl.  The house was filled with actual theatergoers.  The interracial crowd was tourist-free; another good sign, nary an M&Ms shopping bag in sight.  Sitting in the row directly in front of me was Philip Seymour Hoffman (or Phil as his friends call him) and Laila Robbins (not together;) another very good sign.  A few rows ahead of me, Lynn Whitfield sat down.  Things were looking up.  The last time I had been at a performance with such a healthy percentage of actor to commoner ration was August Osage County.
Never underestimate the veracity of good omens.  This play is enormous.  Yes, it is a play set in a war torn far off locale, and yes there are unspeakable horrors brought upon women, men and children.  But there is nothing treacly or sentimental or preachy about Ruined.  It is a beautiful story about the human spirit, that brought me to tears (twice) not out of pity for the characters, but out of admiration for their strength.  There are wonderful moments of laughter, and there is music, gorgeous, poetic music.  The play is set in a taverna/brothel, and the music is live and an integral part of the play.  Kate Whoriskey directs this play at a perfect pace.  There is never one moment of downtime or distraction, I was riveted to every moment and motion on stage  The play is mostly led by female characters who were beautifully developed.  The male lead; Russel G. Jones, broke my heart.  He is Herbie to Saidah Arrika Ekulona’s aptly named Mama.  It does not belittle Ruined to draw this Gypsy comparison.  Both Mama’s live off the “talents” of their girls and both have a traveling salesman wooing them.  Mr Jones’ Christian, like Herbie, is driven by decency, and in Ruined this male character trait is most spectacular.   Ms. Ekulona is a dynamic actress and finds every nuance of Mama, I could not get enough of her.  Condola Rashad (yes, Mrs. Huxtable’s daughter) was a delightful surprise.  She does a very fine job in the difficult and demanding role of Sophie.  It is when she sings that she really comes to life.  A capable singer, she is heartbreaking singing the songs of Lynn Nottage.  Enough can not said about the play itself.  My only concern about it is that now that it has won the Pulitzer, community theatres across America will tackle it.  Human Rights organization will build fundraisers around it.  But without the gorgeous direction of Ms. Whoriskey, the play could be cheapened. Produced on the expansive stage of the MTC and staged in such a realistic manner, there is a degree of intimacy that is a key component to the experience.  This play should not be “watched” it should be experienced.  In the wrong hands it quite possibly could deteriorate into a Congo Monologue.  Please see it now while it is as it should be.  The play and the performances will stay with you and you’ll feel better for having seen it.