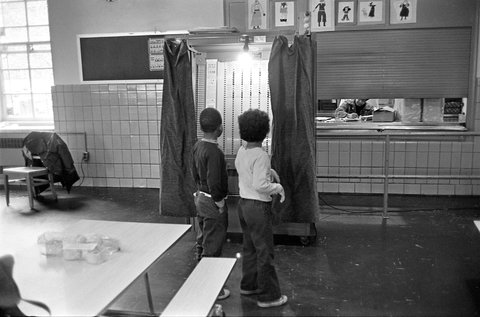 I’m not new to voting; in fact I’ve been at it awhile. Without getting into specifics let’s just say I’ve seen a Bush or two on the ballot. Yet, the act never ceases to thrill me. It is the only endeavor I can think of that feels patriotic, defiant, virtuous and humbling all at once. It’s impossible to ignore how monumental the right to vote really is. There are people still fighting for the right in the 21st century. My gender has only legally been at the booths for less than a hundred years. And there we stand (sometimes for an hour or more,) surrounded by people just like us and entirely different from us. We have (for the moment) set aside our cynicism and are doing the least we can to create the world we want. On those rare occasions (reinsert cynicism) on which we vote for someone we wholeheartedly support it feels as if we’re giving a well deserved standing ovation. “I believe in you!” “I’m rooting for you!” Even when we cast a vote for “the one who is at least not as bad as that other one” we feel as if we’ve made our presence known and have done the right thing.

This year my polling station reinstated the manual voting booths. You remember those enormous metal boxes that arrived at your school cafeteria one or two days before each election? Upon entering the station I heard the unmistakable “clang swoosh” of the machine and felt just a tiny flutter. It is a singularly unique sound and should probably be programmed into electronic voting booths. (Those scanners need a whole lot of remodeling so why not throw in a sound effect?) Whether filling out a bubble sheet (with the world literally watching as there is no privacy) or flipping switches behind a curtain; there is a bit of anxiety. Unlike any standardized test I have ever taken, I actually review my answers: multiple times. Is the X on the right line? Did I fill in the bubble completely? She’s the one I like, right? I often wish I could ask someone to check my work. Perhaps I take it all just a bit too seriously (and could have used a bit of more of that in all those standardized tests over the years.) But I want to believe; a) it really does matter and b) you are what you say/do. So, yes I wake up more excited than any non-candidate has a right to be on voting day. And yes, I spend just a bit more time than is polite doing the actual voting. And yes, I’m always a bit bummed that I only get to do it once.

This would all indicate that I sit by my phone/TV/computer, watching exit poll results all day and into the night. No I do not. I find it all too stressful. On more than one occasion I’ve gone off to bed saying; “Wake me if he wins.” I can’t bear it, particularly after the 2000 Presidential election. I don’t do well with uncertainty and I’m not what you’d call a good loser. Crazy as it sounds, the results are secondary to the process (for me.) The communal act of voting, of gathering with neighbors and strangers to make ourselves heard is more powerful than the results. We are democracy in action. Those elected will go ahead and do a (hopefully good) job. In the end that’s all it really is: a job. But voting is a political and patriotic act and for this little voter, it never ceases to thrill.

Posted by Anonymous on September 10, 2013 in Cultural Critique

One response to “Casting My Vote”