RSS
← Talking About A Revolution
Step Right Up And See The Show! →

Let The Punishment Fit The Crime* 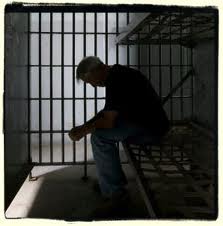 When is a person simply too old to pull off a prison jumpsuit? Is an orange onesie, or perhaps a stenciled; “Property Of” best left to the young? When did older age become synonymous with harmless or pitiful? Age does matter of course. It is a biological fact that our reflexes, cognition and general health tend to decline as we age. But how does our responsibly for past acts diminish?

This week both a 94-year old and 89-year old man are facing prison time, and the reports of this fact are tinged with a hint of public shaming. Do decent people really lock up men who look like great-grandpas? (This thought by a culture whose predominate infrastructure for the elderly are nursing homes.) This perspective might make sense if our penal system was designed to prevent further criminal activity, but it’s not. In fact one could argue that a stint in prison is equal to a graduate education in crime. The intent of prison is punishment, and in a perfect world, rehabilitation.

Of course it’s always crucial that the punishment fit the crime. If an elderly person has committed a victimless crime or a crime of compassion, prison probably doesn’t make a whole lot of sense. But if a 94-year old man is (allegedly) an SS commander and has gotten away with his crimes for 60 years? Well, for starters shame on us (and doesn’t it make all this current talk on immigration seem like child’s play?! Seriously! In the late 1940s and 1950s wouldn’t you think that there was some sort of heightened screening/security?!) By all reports this man is quite robust and has been living in Minnesota after not declaring that he was an SS officer upon entering the country. No kidding. That’s the reason given for his unencumbered pursuit of the American Dream: he didn’t say that he was in the SS. (Where are you when we need you Mel Brooks?) In case there are any hair splitters out there; it is alleged that he was a commander. That is, he was issuing orders to kill. I think we can agree that there is no amount of jail time that would be sufficient punishment but surely anything is better than nothing.

Probably the only thing that would make an 89-year old man who abused, neglected and robbed his centenarian mother seem not so bad is a Nazi officer. But that’s not fair; no one can really compete at that level. The 89-year old spent years fleecing and orchestrating his mother’s neglect. His resources and the legal system itself have delayed his punishment. What’s most relevant in his story is that he committed his crimes at great-granddaddy age. He was way past the discount movie ticket age when he embarked on his mustache-twisting plan.

So why is it exactly that we are supposed to be overcome with compassion for a man who committed some of the worst atrocities of our time and got away with it for 60+ years, and a man who committed his wretched crimes in old age? Which is it we’re to be rewarding exactly? Is it laudable to get away with something (let alone doing so for 6 decades)? Or is it that we’re impressed that anyone past retirement age can perpetuate a complex and brutal crime? There are a lot of people in prison who are not physically or mentally up to the challenges. If we really believe that prison is only for the strong and vital we have a lot of rethinking to do. If instead we believe that after a fair trial criminals should serve time, than that is what they should do.

← Talking About A Revolution
Step Right Up And See The Show! →