RSS
← These Are The Days
Nobody Knows Our Sorrow → 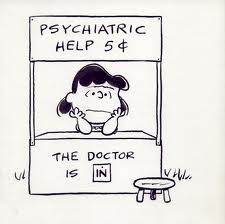 “Background checks!” “Assault rifle ban!” “Mental Health Registry.” I can’t be the only person completely flummoxed by the latter of these gun control cries. There’s been plenty of chatter and innuendo but little if any real explanation as to what in the world is actually meant by a mental health registry. How will illness be identified and categorized? Is the inclusion of a mental health codicil simply a way of saying ‘a registry of people who have exhibited violent behavior in the past and had treatment.’? If so, that is quite the branding overreach. People who commit violent acts are by definition violent. People who harm strangers are not of sound mind. But neither are people who commit white-collar crimes.

Mental health and violence are only linked in terms of a one-way relationship: people who commit violent acts=unwell. But the vast majority of people who are unwell do not commit violence (to others anyway.) A glance through the Diagnostic and Statistical Manual of Mental Disorders IV (DSM) will (takes quite some time but) will result in concluding there is simply no single mental disorder commensurate with violence towards others. If we were to analyze mass murderers we may see similarities. They might have social phobias or a narcissistic personality, they may even have hallucinations. Those are three distinct disorders that are also symptoms of several other disorders. What of people with substance-related disorders? They very well may have induced psychotic disorder, or not. And all psychosis is not the same. Psychotic episodes rarely result in shooting up a pharmacy.

So what do we really mean when we talk about a mental health registry? Even if we scrape away the Pollyanna delusion that the majority of unwell people seek and obtain good mental health care, we are still left scratching our heads. Are we saying that mental health professionals need report when a patient vocalizes intended harm? That already is the case, so if that’s what we mean we should just stop talking about this. Will mental health professionals be asked to expand the reporting paradigm to include those patients they suspect will do harm? Even if that type of Ouija board, tea leaf reading were possible, we’d still be left with a tiny population of people who are on a path of violence and are actively seeking help. In this magical scenario where therapists with any and every kind of training and credentials can see into the future and place someone on a registry; what exactly is the goal? Perhaps (in this lollipop and unicorn made for T.V. scenario) a violence prone person will be prevented from buying a new gun. Fabulous, great. Does it prevent him or her from accessing their mother’s stockpile? Does it stop them from using the guns they already own?

Focusing on the mentally ill is very much needed in this country. People are suffering and need care. Those in a fragile state shouldn’t be expected to do battle with insurance companies or general practitioners. We need to stop whispering when we speak of mental health issues. There is nothing shameful about needing help; but there is much shame to be shared in turning our backs. It shouldn’t be challenging to find good help, it shouldn’t be financially out of reach either. The path towards help shouldn’t be so opaque that people have to ask, “where do I find a therapist.” Professionally staffed mental health clinics, offering consistent and continuing care should be as ubiquitous as LensCrafters. There is no shame in needing help; most everyone needs glasses at some point.

Posted by Anonymous on February 9, 2013 in Cultural Critique, Well-Being

← These Are The Days
Nobody Knows Our Sorrow →