RSS
← Throwing Weight Around
The Fun Of Getting There → 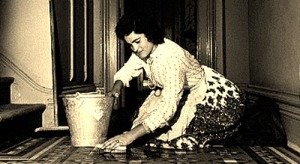 How many times have you heard someone described as ‘selfless?’ It’s always meant as a compliment and often attributed to someone who may have gone unnoticed. There’s a chance the term is attached to men, but most likely it’s a woman who’s received the ‘praise.’

It’s interesting that anyone would ever consider having an absence of self to be a virtue. In some cases it might just be a matter of semantics. Perhaps what they really meant was not selflessness as much as generous of spirit or empathetic. True selflessness conjures the most depressing of images: an individual whose only sense of purpose is external, who expends all of their creative energies on the perceived needs of others. How is neglecting oneself ever virtuous? Any person over the age of 15 or so, in their most honest bravest moment, will admit that it’s always easier to focus on others than oneself. It’s why teenagers lose themselves in the lives of boy/girlfriends. Some of us never grow out of that impulse.  Showering others with attention takes boatloads of physical energy but not a whole lot of emotional energy. Listening to one’s inner voice and having it guide our life’s path is work. It takes focus, daring and fortitude to know who we really are and what we want.

There’s one undertaking that is forever being linked with ‘selflessness’: Motherhood (like the flag and apple pie) is a loaded term. Popular culture is rife with images of aproned women scrubbing floors to provide their child with a better life. Mothers are spoken of in hushed reverent terms usually reserved for saints. Nobody talks about fathers that way. Fathers are not perpetually giving (unless we’re romanticizing their wallets.) If they are thought of at all it’s as disciplinarians or buffoons. There is no glowing light that surrounds them. Nobody has ever chastised a curser with the phrase; “Do you kiss your father with that mouth?!”

Newsflash: women are not necessarily encouraged to have a strong sense of self. They are (in 2012!!!) lauded for being behind the scenes making other people’s lives happen. They are, if you will, the woman behind the curtain. This of course is part of the lingering backlash to the second wave of feminism. It’s understandable that woman are continuously being pushed back in time as they make real strides in the world and economy. The marketing of 6-inch heels, girdles, fake hair, and means to Barbie bodies, doesn’t happen in a vacuum. Conspiracies, even passive ones, do exist. It’s somewhat predictable that as women outpace men in 4-year degrees television programming of the ‘girls gone wild’ ilk has increased. It makes sense.

What doesn’t make sense is why women are such willing players. How did a generation (or two) raised during the Title lX years aspire to be the water-girl? Did they get their fill of being in the game?  And what of the children? What do we teach our children when we exhibit selfless behaviors? Do they grow up with a skewed sense of importance? Do they not grow up having witnessed what awaits them? Are they handicapped for not learning how to do for themselves? Wouldn’t they be further ahead learning that empathy and generosity of spirit are integral parts of what makes us fully formed and actualized human beings?

Posted by Anonymous on August 30, 2012 in Childhood, Well-Being

← Throwing Weight Around
The Fun Of Getting There →