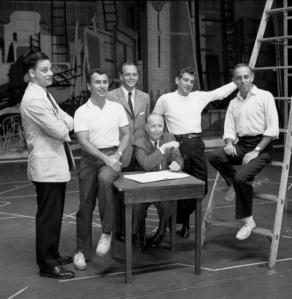 The Yale School of Drama has just announced an $18 million gift.  A gift that substantial (to an arts program!) is newsworthy enough, but this gift is not for a building or other monument to immortality.  The gift is for the creation of new plays and musicals.  Musicals.

Knowing nothing of the details of the gift or of the business dealings that led to such largess (the gift was bequeathed by the late alumnus James Binger) I can only shout “Hurrah!”  Lots of universities, philanthropists and celebrities love to talk about supporting the arts.  (And why not? Who in the world would argue with that sentiment?  It’s right up there with; “children are our future.”)

Financing the development of new works in a university theoretically fosters a purely artistic basis that may not exist in a theatre company.  Even not-for-profit theatre companies have to sell tickets.  The theatre laboratory in a university setting is not entirely novel.  But when is the last time you heard of an Ivy League university investing in musical theatre?  I have nothing but respect for musical theatre.  I am a 100% Sit Down You’re Rockin The Boat, Nothing’s Gonna Harm You, 7 1/2 Cents, If You Could See Me Now, kinda gal.  But in some circles musical theatre is often a punch line.  It’s seen as the goofy cut-up sitting at the grown-up’s table.  Yet, creating an excellent musical is exceedingly difficult and involves collaborations that can only be categorized as alchemic.

During the past decade some truly magical new musical works have made their way to the New York stage.  Spring Awakening and Passing Strange reinvented the concept of book and score to great results.  The Light in the Piazza was a fresh, delicate and beautiful new work in the most traditional of formats.  It is these musicals we must remember when we think of all the movie-to-musical or comic book-to-musical shows dotting the great white way.  (Note: The Light in the Piazza was technically a movie-to-musical but the movie was 50 years old and the musical so self-contained and lovely that aside from the royalty issue, its origins were immaterial.)

Creating a great musical takes a great book, great lyrics, a great score and great choreography.  Collaborations must be created and fostered.  It has been at least a generation since we’ve had a notable musical team.  We still swoon over photos of the creators of West Side Story at work, for that very reason.  Universities (the places that bring us friends for life by virtue of the randomness of roommate assignments or drunken evenings) are the very place to foster these relationships.

Recently we’ve been hearing less than glowing tales of how higher education is serving students.  We know that funds to the arts have been decreasing for some time and we need only take a walk through Times Square to see where innovation in musical theatre stands.  This ($18 million) gift Yale, may in fact be a gift to theatre lovers everywhere.

Posted by Anonymous on April 26, 2012 in Education

4 responses to “Words and Music”