End Of The Rainbow – Review 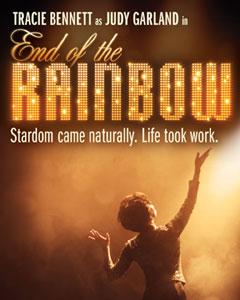 The Belasco is an ornate wonder of a theatre.  The walls are covered in dark pastoral murals, the ceiling in stained glass coats of armor.  Carvings and drapery cover every other surface.  All of the lushness stands in somewhat stark contrast to the excruciatingly discomfort of the seats.  It’s as if the theatrical experience was forgotten in the act of creating the spectacle.  The Belascon’s current inhabitant; End of the Rainbow might well be suffering the same condition.

The play, by Peter Quilter captures the essence of the final months of Judy Garland’s life.  Quilter understands the contradictions and complications that were at work.  But directed by Terry Johnson, this production isn’t so much a play as it is a version of Beatlemania.  There is far too much tribute singing both in the recreation of the concert performances and (in a bizarre break in character) to stir a rousing ovation at the end of both acts.  Less singing might make this a more interesting play.  The problem however with knowing exactly how something ends is how then to make it dramatic.  Sometimes that can be accomplished with very fine acting.

Tom Pelphrey is spot on as Mickey Deans, Judy’s very young soon-to-be fifth (and last) husband.  Mr. Pelphrey has the unique ability to walk the tightrope between sinister and charm.  (Someday I hope to see him in How I Learned To Drive.)  Michael Cumpsty portrays Judy’s sometime accompanist, Anthony.  His is the most compelling and beautiful portrayal.  The only emotional resonance of the show comes from his two minute speech, downstage in a single spotlight.

Tracie Bennett doesn’t so much play Judy as she does impersonate Miss Garland.  It is terribly distracting to experience a full-length play built around an impersonator.  It is immaterial to assess whether someone is a good Judy Garland impersonator or not.  The fact remains that if anyone could even come close to the magic of the real Judy Garland, we would not still be talking about her (and her completely irrelevant fifth husband) 40+ years later.  Keeping that sad fact in mind, a performer is further ahead to take a page from Meryl Streep’s book, and capture the essence of an icon, not create a pale imitation.  It might sound like a minor issue, but the difference (to an audience) between acting and impersonation is tremendous.

The set of this production (William Dudley) is of the Ritz Hotel (London) and melds beautifully into the ornate theatre.  There is a very charming band set behind a scrim that is revealed to create the concert hall.  There is a bit of awkwardness with the transitions on stage.  A garment rack wheeled onto the stage to indicate a dressing room is silly and seems like a leftover device from a work shopped performance.

I was struck by some of the script’s painful yet accurate insights and think Mr. Quilter could have the makings of a gem, in the right hands.  However he probably needn’t bother.  In its current form, this show will be a huge success.  The audience went wild for Ms. Bennett’s rendition of one of Miss Garland’s worst performances on record.

Posted by Anonymous on April 5, 2012 in Uncategorized