RSS
← Spring Is In The Air
And The Beat Goes On* → 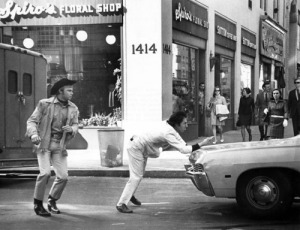 I’ve always fancied myself the Carnac of human behavior and motivation.  I admit, I’ve been known to get flummoxed by habitual bad behavior (tantrums and bullying in the workplace, obliviousness of others in public, etc.) but by and large I find most behavior and/or language to be easily decipherable.  In truth even the bully at work is pretty simple; he fears being discovered, (it’s just difficult to remember that when the behavior takes on science fiction proportions.)  People grooming themselves in public or throwing their garbage at the feet of others, or talking at full volume (on the phone or at a baby) or polishing their nails on an airplane, aren’t evil they probably could have just greatly benefited from a firm swat on the behind at some point, as a gentle reminder that they are not in fact all alone in the universe.

I really do believe that there is very little we say or do that doesn’t speak to how we feel.  We may not know it at the time, but that doesn’t mean it’s not happening.  Of course this isn’t to say that everyone in our realm can read our minds.  A future mother-in-law asking a bride if she can wear black to the wedding, might feel very overweight and not in fact be planning a stealth boycott of the nuptials.  But I assure you there was some feeling behind the query.

So here I sit with my Dr. Nick’s Academy certificate in peopleology and I feel my training/talents ebbing.  I find myself less adept at reading intent.  It’s not slang or inflection or even means of communication that has me floundering.  I can see through all that as if it were mere cement and I engaged my super-x-ray vision.  I am beginning to suspect that my kryptonite, if you will, is the proliferation of snark.  I am fluent in the Don Rickles wannabe variety of snark (for the motivation of this genre of snark see bullying above.)  But there is a subtler variety, one that might even be categorized as “whining.”  On the street, and in the media, I keep hearing these urban whines: People complaining about the livability of the city.  It is objectively bizarre to begin with (ahem, have you ever heard of the 1970s?! you think Disneyfied NYC is hard?) but it also is completely illogical.  Unless you are in a witness protection program, presumably you are free to leave.

I suspect that these grumblings and mumblings are not the noise coming out of a jilted resident on his way back to Indiana.  I have a feeling that what all these complaints really mean is “I thought it would be different, and before you can point out how I’m not where I thought I’d be in life, I’m gonna shoot the first shot.”  But as I mentioned, I’m not entirely sure.  What I do know is that there is something cloyingly adolescent about the negative Nancy natterings.  Snide remarks about paying huge amounts to live in a tiny box, have a certain; “I meant to do that” element to them.  (By the way, when did people decide that what they were paying for in urban housing was somehow related to square footage?)  Speechifying about the dirty tiles in the subway station is reminiscent of a teenager kicking the gravel at the Colosseum and complaining to his parents; ‘it’s really dusty here.”

Negativity is every bit as contagious as happiness.  It also feeds itself like a cruise ship passenger.  It doesn’t make someone hip to hate, it just makes them a bit toxic.  If it’s too loud, too crowded, too hot, too cold, too pricey, too smelly, toodaloo.  It’s a big world, surely there’s someplace for everyone.  If in fact, the grumblings, whining, pithy-esque condemnations are not geographically specific and just a new hipster affectation/slang; ack!  Please let it run a swift course.

Posted by Anonymous on March 12, 2012 in Cultural Critique