Because I Said So, That’s Why 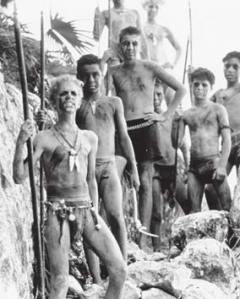 There is now legislation (in New Jersey) to combat bullying.  In schools.

I know, I too would be ready to cheer from the rooftops if we, as a people, had decreed that picking on persons or groups perceived as weaker than one’s own is an abomination.  What a world, what a world.

But no, the legislation I reference is only about schoolchildren.  There is nothing magical in the legislation.  It is exactly the kind of rules, forms, standards and bureaucracy one would expect.  There will be training for personnel, awareness campaigns, et cetera.  I am less interested in the minutia of legalizing common sense than looking down the road that led us to this point.

Why is bullying such an issue today?  (I am making the leap that bullying is in fact an “issue” as why else would people need to legislate?)  I think we can all agree that not much has changed about the physiological development of children over the past, say, 50 years?  Children have not turned into little Rambo like creatures fortified by steroid rich lunchables.  If anything, national childhood obesity rates would suggest that children have become less physically threatening in recent years (we are not including the threat of sitting on someone smaller than oneself.)  It is safe to assume that any change, on the part of the children, is psychological/emotional.

There is a traditional dichotomy that has been continuously eroding over past recent years: grown-ups were in charge, and all children were not gifted.

No doubt we all agree that children are not little adults.  They are not mentally or physically equipped to be mini-adults.  In fact, that is why parents were invented.  Minimally, parents help guide young minds in impulse control, decision making and the like.  Good parents help children grow into responsible and compassionate adults.

The child factor in this equation is far more troubling to me.  Passive or narcissistic parenting can be changed or augmented with positive interactions with aunts, uncles, teachers and the like.  But teaching a child that they are the center of the universe is cruel.  Not only does this perspective do nothing to help a child learn the skills necessary to be a functioning adult, it is just mean.  It is false advertising, plain and simple.  Not only is it not possible for any person to actually be the center of the universe, but what do you think will happen when he/she inevitably discovers the truth?  Is there any wonder that mental health services are at their breaking point in colleges and universities across the nation?

When we have to legislate adults to intervene when they see children misbehaving, we have a problem.  When did it get so scary for adults to embrace their own (innate) authority?  When did we decide that raising emotional terrorists is good parenting?  When exactly did we decide that the most ill-equipped of our society are in charge?  Legislating in loco parentis in the schools?  This is only the tip of the iceberg.

Posted by Anonymous on August 31, 2011 in Childhood

One response to “Because I Said So, That’s Why”