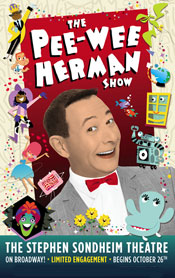 Reviewing Pee-wee Herman’s Show on Broadway, is somewhat akin to reviewing Mummenschanz. Playing at the non-traditional Stephen Sondheim Theater and directed by Alex Timbers (Bloody Bloody Andrew Jackson) the stage is set, if you will, for an unorthodox experience. Mr. Timbers’ hand is evident in the use of strobe lights and spotlights in the audience’s face (a leftover Bloody Bloody affectation no doubt) but he has mercilfully left the actors and script to its own device. The apron of the stage is dressed in cartoon figures that are completely unrelated to Pee-wee, as is the pre-show music and light show. But once the curtain rises? It is pure unadulterated Playhouse. This show is a modernized stage production of the very popular 1980’s television morning show, complete with a return of several of the actors. Written by and starring, Paul Reubens, the show stays very true to its roots while embracing this very different format. This show is clearly not for everyone, and those expecting homage to the Pee-wee movies of the 1990’s will be confused and disappointed. I don’t think children would enjoy this show either (I was very careful to NOT attend a matinee, so I can not attest to this firsthand.) This show is for fans of Paul Reubens’ clever, funny and incredibly creative television show. However, you will not be paying a lot of money to just have a larger version of T.V. What is remarkable about this production is the “happening” of it all. From the moment Mr. Reubens came out (in character) prior to the curtain being raised, the 1,000 member audience responded as one. For anyone who ever experience Rocky Horror at its height, this will feel familiar to you. It is an incredible sensation to scream, simultaneously with 1,000 people, at the secret word. Forgive me, it simply is. There is also something very moving about the deep love that is shown to Mr. Reubens. He is a truly gifted man who has not always been treated so kindly.