RSS
← Unnatural Acts – Review
I’ll Have What She’s Having → 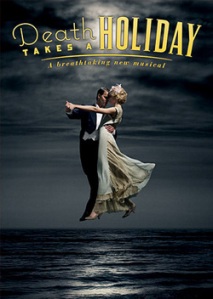 In the hands of a deft director (Doug Hughes) skillful musicians and excellently cast actors, Death Takes a Holiday is a simply wonderful experience.  The new (Rondabout Theatre) musical is staged at the very compatible (425 seat) Laura Pels Theatre.  The intimacy of the theatre is perfectly suited to this delicate production.  The set (Derek McLane) is rather reminiscent of the recent revival of Ragtime, which ostensibly was a concert version of the musical.  (I was not surprised to learn that Mr. McLane did in fact design Ragtime.)  I am left with a bit of a chicken and egg question in wondering if Mr. McLane was hired to lend an air of a staged concert to this production, or if this production feels like a staged concert due to the set.  Regardless, the device works.  The orchestra(-lette) is set behind a scrim in the fly.  While it is always nice to see the musicians (no matter how few there are) the upstage fly is the perfect placement in this theatre.  With the (diminutive) orchestra upstage, the actors should be perfectly comfortable without microphones in a theatre this size.  But alas, no.  More than once I was reminded of the Lena Lamont mishaps in Singin’ in the Rain.  Perhaps taping the body mic to the forehead rather than the side of the face, would help?  Perhaps it is time I simply gave up this cause?

Even with the excessive amplification, there is a lovely old fashioned quality to this musical.  I am a huge fan of simplicity and a City Center Encores devotee.  I am not bothered in the least by the lack of dance in this musical.  I suspect some ticket holders might be disappointed, but I am of the “less is more” and “if you can’t do it well, don’t bother” school.  I’d much rather see a lovely performance of honest portrayal than a casserole of all things to all people.

The book, by Peter Stone (1776, Titanic) does not alter the original storyline or add superfluous sidelines.  (There were two incongruent attempts at lewdness with which Mr. Stone should not have sullied himself.)  In the film to musical genre, it is as straightforward (in the very best sense) as The Light in the Piazza was/is.  Maury Yeston (Titanic, Nine, Grand Hotel) wrote the lyrics and music, and clearly is also no stranger to the movie – musical genre.   There are a few absolutely delicately pretty songs in the show.  Nothing one would necessarily hum, but quite nice.  I did have an issue with the scoring of the music.  Many of the numbers are written in a far too expansive range.  Nothing would have been lost by bringing down the excessive high notes.  The actors, rarely hit them, and when they did it was with effort and flop sweat.  It was distracting to the audience and made me wonder what was motivating Mr. Yeston.  The best musical numbers are those with the household staff.  Their humor and vocal prowess were an absolute delight.  There is also a number, performed sitting on the apron, by the three youngest female characters, that is very memorable.  The three part harmony is splendid.

The casting of this production seems to be a nod to the past as well.  There are boldfaced theatre names (Matt Cavenaugh and Rebecca Luker) but no US magazine veterans.  Mr. Cavenaugh’s role is tiny, which I found surprising, considering his recent lead roles (West Side Story, A Catered Affair.)  Ms. Luker’s role was much more significant.  Oh, to hear her sing!  Even in a mostly forgettable song.  Had it not been for her solo, I would have considered the entire cast all quite very good singers.  She transcended them all.

The performance I saw was the first in which the lead had dropped out.  He was the same actor who was a recent no-show for opening night.  The cause stated is laryngitis.  One has to wonder about the preparation younger actors are receiving.  More often than not, I have witnessed no-shows at matinees (and they are always the under 35 set,) leading me to wonder about their physical preparation for 8 shows a week.  I am also at a loss as to how an amplified, rather subdued score (it’s no Phantom!) can be so straining.  I do not wish to sound unsympathetic.  Truly.  I simply wonder if more is owed this generation of performers.

Digression aside, I thoroughly enjoyed this show.  Even without an overture, I knew in the first 5 minutes that it was going to be a good time.  I love seeing new things, and what a joy to see something lovely and devoid of gimmick.  There were no mindless repetitive thumping bass lines, no screaming lyrics and no sound effects.  There were instead; honest portrayals of human beings, with a score that continually worked to move the story along.  Much is made of bright and shiny these days.  Even more is made of everyone’s 15 minutes and spotlights.  We are often in pursuit of perfection, in material objects, in others, etc.  In musical theatre there is an embarrassment of perfection.  But for every Gypsy or Showboat, there is a Starlight Express, and in between, there is a whole lot of real estate.  I am very happy to live in the neighborhood of Death Takes a Holiday.

← Unnatural Acts – Review
I’ll Have What She’s Having →