A View from the Bridge – Review 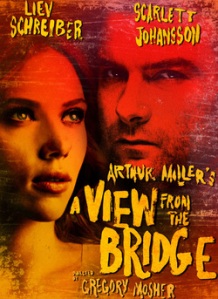 Last night I attended a preview of A View from the Bridge at the Court Theatre. This is a limited run (14 week) production directed by Gregory Mosher (Glengarry Glen Ross, Speed the Plow.)  This was my first time with this particular Arthur Miller play.  There is as much back story as there is theatrical story, and I found it all almost too much to absorb.  “Bridge” is often seen as the final “take that” in the demise of the friendship between Elia Kazan and Mr. Miller.  For years after the McCarthy trials, the two spoke only through their art forms.  It is said that Miller expressed his sorrow and rage at Kazan with The Crucible, and Kazan replied with On the Waterfront, that then followed by “Bridge.”  It is very hard to ignore all that when watching this play that centers around codes of honor, betrayal and human frailty.
The play is crafted beautifully and narrated by the attorney, Alfieri (Michael Cristofer.)  Mr. Mosher has directed Cristofer beautifully.  It is no small feat to narrate a drama while playing a character within the play.  His transitions are fluid and his stage presence pulses with an understated power.  The story, as told by Alfieri, is that of a family of first generation Italian-Americans in Red Hook, Brooklyn.  Eddie (Liev Schreiber) and his wife Beatrice (Jessica Hecht) have raised their niece Catherine (Scarlett Johansson.)  Catherine is supposed to be a sheltered seventeen year old with her first exposure to men her own age (illegally) arriving in the form of Beatrice’s cousins (wouldn’t that make them Catherine’s cousins too?) Rodolpho and Marco.  Tragedy unfolds as Eddie finds the budding romantic relationship between Catherine and Rodolpho intolerable.  There is an unwholesomeness to Eddie’s interest in Catherine that colors his entire perspective.  The tragedy that results from a man who loses his conscience while caught up in his misdirected impulses is life altering.
On paper, this is a powerful drama, and I have no doubt that the critics and audiences will find much to wax poetic.  I would tend to agree, with some minor cast changes.  By now you have probably heard of the hasty departure of the original Rodolpho.  Apparently the head injury he received from Liev Schreiber in a fight scene prevents him from returning to work.  This is a shame, as the role is pivotal and the understudy (Morgan Spector) lacks the necessary charisma.  He is physically uncomfortable on the stage and in this role, and he (forgive me) lacks the pretty face that is necessary for this part.  Another little bit of unsurprising miscasting is that of Miss Johansson.  She manages to navigate the stage in a convincing manner, but her age is much too distracting.  It is impossible to believe that a 26 year old is a sheltered 17 year old.  She is not assisted in the least by the costuming (Jane Greenwood) that makes her look even older.  This working class girl of very meager means is put in form fitting color coordinated outfits and bright red lipstick.  She is made to look like a 1950s pin-up, and the result is that she and Liev look perfectly natural together as a couple.  Had Miss Johansson been 10 years younger, and perhaps not spent as much time with a dialogue coach (her attempt at a Brooklyn accent is distracting and inaccurate) I think she could have pulled off the part quite well.  Jessica Hecht is brilliant and luminescent and I want to see her in every American classic play.  She becomes the character Beatrice so completely that even her trademark screen mannerisms disappear. My heart broke for her.  Liev Schreiber is a fine actor, there is no doubt.  I predict that Ben Brantley (sitting the row behind me) will adore the performance, as will The New Yorker.  Me?  I found it overwrought and distracting.  I felt as if I was watching him act for two hours.  I never “felt” anything, and that is a shame.  I wanted to be pulled into his story and empathize with his conflict, for I believe that is what Mr. Miller intended.  However, all I really felt was that Mr. Schreiber was performing a one man show and that the emotional calisthenics he demonstrated did not hint at a fun dinner companion off the stage.
The bones of a lovely production are in place however.  The staging was wonderful, with self contained, restrained moving sets and brilliant fight scenes.  Fight scenes, as we all can attest to, are a horror.  They are not easy to choreograph (Thomas Schall) and certainly not always easy to watch.  These were pitch perfect and utterly convincing (except for one small moment when Mr. Schreiber is careful not to bang Mr. Spector’s head on the table.)  The costume design (save Mr. Schrieber’s “dockwocker dressed by Armani” look, and Ms. Johansson’s pin-up look) are brilliantly on point.  There is one off kilter set construct in the venetian blinds in the Red Hook tenement apartment.  I did very much appreciate the absence of microphones and the smallness of the production, both designed to pull me in.
The audience make-up was interesting enough to warrant mention.  This being previews, there were rows of critics in my section, as well as actors and other such insiders.  What was perhaps more unique, was the large subset of audience members who had seen the original production (1956.)  This made for a very savvy audience (I’d be savvy too, if I’d been going to the theatre for over fifty years!)  The subtlety of the ovation will not be heard again once the show opens.  These insiders gave very enthusiastic applause to the excellent Marco (Matthew Montelongo,)  Ms.Hecht, Mr. Cristofer and Mr. Schreiber, and gave what is known as “polite applause” to Ms. Johansson.