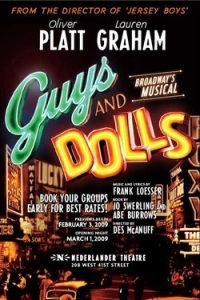 What’s playing at the Nederlander?  I’ll tell you what’s playing at the Nederlander; one of my favorite musicals, Guys and Dolls.  This current revival (the most recent was starring Nathan Lane and Faith Prince) is a throwback to the “let’s put on a show in the barn” milieu of shows.  I am not referring to the ingenuity or frugality of kids performing in a barn, I am instead referring to the the plethora of novices involved in this production.  The director, Des McAnuff has limited, if any musical theatre experience (does Jersey Boys count as musical theatre?)  The choreographer, Sergio Trujillo lists Jersey Boys and All Shook Up as his most significant credits.  I believe that both of these jukebox musicals involved a lot of rhythmic standing.  The four leads in this revival have nary a musical between them of which to speak. To Mr. McAnuff’s credit, he knows that he is in over his head.  His insecurities can be seen in his “throw everything on the wall and see what sticks” direction.  There are more devices and gimmicks in this production than you can shake a pair of dice at.  Mr. McAnuff actually took the stage before the houselights dimmed to “explain” the preview process; in essence he was apologizing.  Oh dear, Mr. McAnuff.  The show opened in the most promising of manners.  The stage lights went up to show a three tiered orchestra upstage, set in the most delicious art deco bandstand (times three.)  It was a glorious way to highlight the (very small) orchestra.  And then they disappeared, never to be seen again until the opening of Act II.  Having the orchestra upstage and not in the pit provided a missed opportunity to not mike the actors.  The Nederlander is a small house, and the reduced orchestra set upstage would not have blocked even the weakest voiced.
For those of you unfamiliar with the show, it opens with a New York City street scene; cops, gangsters, regular people, all walking and interacting during the overture (almost a silent movie if you will.)  Well, Mr. McAnuff decided to try something new; he opened with Damon Runyon typing the story.   Now before I rant about the kitschy and absurd nature of this gimmick, let me stress that if you want to direct something new, do not REVIVE something old.  The Damon Runyon character shows up (silently and ridiculously) throughout the performance.  Just when I learned to ignore the shadowy figure, the surreal wall is broken in Act II and a character talks to Mr. Runyon (groan!)
The use of space is a tad bizarre as well.  The orchestra pit is used continuously for no effect that I could discern.  Picture Mama Rose walking up and down up and down up and down those orchestra steps for two and a half hours.  The gimmick works once, at most.  The boxes are used as well, to simulate what, I am not sure.  During the two Hot Box performances, extras are in the boxes “manning the spots.”  That might work.  But why is Nathan using a pay phone in the box? Speaking of the Hot Box…when did it become a pole dancing strip club?  While we’re on the subject, when did time go backwards in the Hot Box Club?  Mr. McAnuff (I suspect) changed one line of lyric to indicate that it was the early thirties in the Club.  Someone forgot to tell the set designer and costumer, they both think it’s the early fifties.  Of course the video designer(!) Dustin O’neill knows what year it is, and pushes the “elevated train” button on his console several times to prove it.  The video is used once brilliantly.  It is always a challenge on the stage to move the actors and action into the sewer.  The video and sewer pipes lowered from the fly is a perfect solution.  The theatre needs more of that ingenuity and less video of rays of sun gleaming from the heavens in the background of the Save the Soul Mission.

The cast of this revival is consistent.  Everyone seems equally ill suited to the task.  There are two rather small roles that shine in this production.  Harry the Horse (Jim Walton) and Arvide Abernathy (Jim Ortlieb.)  They both are utterly convincing and add a great deal to the production.  Mr. Otlieb accompanies himself on the piano adding an incredible intimacy to “More I Cannot Wish You.”  (I’ll let you have that revision Mr. McAnuff.)  Oliver Platt is Nathan Detroit, a role that does not require much dance and calls for limited singing as well.  Mr. Platt is a very gifted comic and poignant actor who is offered nothing to play off of with Adelaide played by Lauren Graham.  Ms. Graham is being directed to play Miss Adelaide in an overly enunciated monotone.  Zero affect.  In a more compelling actress, I suppose this might work, but Ms. Graham can neither sing nor dance and is excruciatingly uncomfortable on a stage.  She was not served well by the people around her.  Novice or not, someone could have explained the laugh lines to her.  “A female remaining single; just in the legal sense” should be achingly funny!  I am still wondering why Miss Adelaide, a cabaret performer, would be played by someone who can not sing or dance.  The choreography for Ms. Graham consisted of having her stand still and taking off her clothes.  Perhaps Mr. McAnuff saw Gypsy too many times?  Craig Bierko as Sky Masterson had about as much charisma as Ms. Graham and a vocal range of one octave.  While his voice is pleasant, the songs are almost unrecognizable due to the arrangements necessary to accommodate Mr. Bierko.   Mr. Bierko spent his first twenty minutes on stage doing a passable Marlon Brando imitation, and then seemed to lose interest.  It is extremely telling that the most captivating character in this production was  Sarah Brown, played by Kate Jennings Grant.  Sarah Brown and her merry band of missionaries is usually the downer of the show.  But as the only singer in the cast, she was a joy to watch.  I got the impression during some of the songs, that the musical director, Ted Sperling, worked alone.  The non-dancing songs, were so well designed, I have to believe they were done in a vacuum.  To be frank, all of the songs were non-dancing for all intents and purposes.  Even the sewer scene (“Luck Be A Lady”) an explosion of male dancing under almost any direction, staggered with only a series of backflips to indicate dancing.   The Havana scene, usually a burst of color and sex, is disappointing.   If I did not know the dance story line (Sarah becomes jealous of the attention paid to Sky) I would have missed the plot entirely.  I was reminded throughout the (very long) evening of how many high schools have done a better job with this show.  To Mr. McAnuff’s poor drowning credit, I must say that I was touched by how protective he was of Oliver.  Every number is staged to draw attention away from Mr. Platt’s (very valiant) attempts at dance/movement.  Mr. Platt could be wonderful as Nathan, and it is terribly wasteful that the cast and production staff is squandering this opportunity.  I saw Mr. Platt after the show, and I believe that he is as disappointed as I am.