RSS
← God of Carnage – Review
Desire Under the Elms – Review → 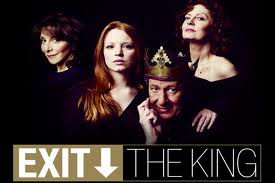 I went to see Exit The King this weekend, with just a tad of reservation.  Well, more “dark foreboding” than a “tad of reservation.”  I was almost certain that Eugene Ionesco and I would never understand each other.  I discovered that I was right, and also that I don’t need to understand someone to enjoy them.  Take the French for example.

I found myself completely absorbed for two and a half hours.  This 1963 revival was directed by Neil Armfield (hailing from Australia) and performed at the stunning Ethel Barrymore Theatre.  The small cast is headed by Geoffrey Rush, Lauren Ambrose, Andrea Martin and Susan Sarandon.  The strong, often absurd characters work in perfect concert with each other and the set design.  It is a credit to Mr. Armfield that the small cast, top heavy with powerhouses, works as a synchronized ensemble.
The storyline and references of Exit The King are shockingly modern.  Yes, 1963 was not that long ago, but the political references are so current, as to be somewhat depressing.  What have we been doing for the last 45 years?  It’s probably more a testament to Ionesco than a critique of our current culture, which makes this play feel so modern.

The king and the natural resources are all dying, but Andrea Martin will make us all forget it.  She is a gem, and I am delighted that she has been on the New York stage at least three times in the past year (On The Town, Young Frankenstein.)  Lauren Ambrose (Romeo and Juliet, Hamlet) is ethereal and stunning and will rule the Broadway stage at some point.  Geoffrey Rush is incredibly physical throughout this play.  He is a dynamo and very very funny.  The doctor (William Sadler) and the guard (Brian Hutchinson) were both quite good, although I must confess to picturing Tim Conway in the guard.  Mr. Hutchinson’s mannerisms were either lifted from the “Old Man” character, or I just watched far too much television as a child.  Ms. Sarandon spent most of the play in profile, and seated as I was in the fourth row, I was mesmerized by her two tone make-up (neck brown, and face white to give definition to the jaw line.)  I was also quite taken with her (very large) tattoos and thumb ring.  I’m guessing Mr. Armfield lost that round.  Her performance was not terribly interesting.  The body accouterments plus the Playbill biography (omitting all acting credits, and simply citing “motherhood and activism” as her accomplishments) scream “star.”  I much prefer watching an actress than a star.

My only hesitation in recommending this production is that I had incredible seats.  I’m not sure if I would have enjoyed it as much in the balcony.  Seated front and center, I truly felt swept up.

← God of Carnage – Review
Desire Under the Elms – Review →