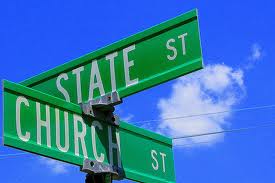 The minister selected to deliver the benediction at the 2013 inauguration has withdrawn. It seems that his well-publicized (and recorded) anti-homosexual remarks were creating a distraction. This of course is not the first time that a preacher who has expressed bigotry has been offered an exalted platform by (current and past) White House occupants. This may however been the first time that bigotry was acknowledged as potentially offensive (after the selection but before the event.)

The thing is, religion by its very definition is about exclusion. ‘This is what we believe in.’ There can be no ‘we’ without a ‘thee.’ Whether we personally engage with the philosophy of organized religion or not is somewhat beside the point. What is of significance is how comfortable we seem to be with mixing church and state. In most of our lifetimes we have never before seen the extreme polarizing and lethal effects of religion that are in play today. War is raged and terror acts committed by people citing a conflict of religious ideals. We know from our own recent presidential election how divisive religion has become in this country. It has been many decades since we considered ourselves a white Christian nation. Our language reflects that change. We are cautious in how we identify people, we use euphemisms and/or bundle all winter occasions in place of casually tossing about; “Merry Christmas.’ We can and do change. Yet, our public institutions are still decorated with Christmas trees (presumably paid with tax dollars.) Our government hosts prayer breakfasts and includes prayer in ceremonies of state. Why?

Religion is a private matter and personal decision. If memory serves, that was the motivation for founding America. So why do we unconsciously continue to allow religion into our government? Is it unconscious? Could it be that there are people in power who still have cold war tics? Are we afraid of seeming the very thing some accuse us of; godless? Could it be that there are people who do not trust strength of character, integrity and morality without clear and present doctrine? Perhaps it’s a little bit of habit, a little bit of superstition and just a dash of unconsciousness. At a time in history when we seem to go to lengths to seem inclusive and/or ‘tolerant’ it all seems embarrassingly anachronistic. Seeing a modern president (or any elected official) include religious observance into official state business is like seeing someone pat their secretary on the bottom. To my eyes anyway.

*In 1954, (during the McCarthy era and communism scare) Congress passed a bill, which was signed into law, to add the words “under God” to the pledge of allegiance.

Posted by Anonymous on January 11, 2013 in Cultural Critique